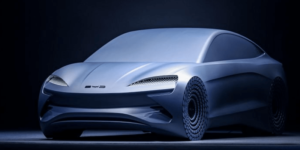 With the Ocean-X, BYD presents a new concept car based on its ‘e-platform 3.0’ electric car platform presented in April. BYD has not yet revealed whether and when the Ocean-X will become a production model.

BYD’s ‘e-platform 3.0’, which is to be offered to third-party customers in the near future, relies on the manufacturer’s Blade batteries and is supposed to be able to achieve “enormous driving performance and range”. The platform also enables fast charging at 800 volts.

As the Shenzhen-based company announced in April at the Shanghai trade fair, the ‘e-platform 3.0’ is to form the basis of the “next generation of high-performance smart EVs” and is to be characterised by four advantages: Intelligence, efficiency, safety and aesthetics. In addition, costs are to be reduced as core components are further standardised and integrated into the platform. According to BYD, numerous key modules have been newly developed for the drive system. These components are to be smaller, lighter, stronger and more efficient. The 8-in-1 drive module, for example, is said to be able to achieve an efficiency of 89 per cent. For the battery mounted between the axles, BYD relies on its ‘Blade Battery‘, i.e. an LFP battery with large-volume cells, introduced in 2020.

The first production model based on the new e-car platform, the BYD Dolphin compact electric car, went on pre-sale in China in August at a price of 96,800 yuan (approx. 12-700 euros) after deducting the government subsidy.

The Ocean-X, on the other hand, which is also to be based on the ‘e-platform 3.0’, is a sporty mid-size sedan that is supposed to achieve “high performance” thanks to its 8-in-1 drive module and all-wheel drive. BYD, however, does not yet go into more detail. With the long wheelbase and shorter overhangs of the ‘e-platform’, BYD not only wants to enable larger batteries (the maximum capacity is not mentioned, however), but also a more spacious interior and better handling thanks to the low centre of gravity. Sedans based on the platform should be able to achieve a cW value of 0.21; a value that BYD also quotes for the Ocean-X. However, the Chinese company did not provide more technical data on this model at this point.

Vitesco is getting ready to manufacture 800-volt e-drives