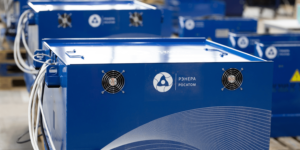 Russia’s nuclear corporation Rosatom announces the location for its battery cell factory announced in March. It will be built in the western Russian exclave of Kaliningrad and is to produce battery cells for electric vehicles and energy storage systems from 2026.

The initial volume of the Russian Gigafactory is now given by Rosatom as at least 3 GWh – one gigawatt hour more than previously announced. A further increase in production capacity up to 12 GWh is already being considered. “The signals we receive from the Russian market indicate that the production volumes we planned a year ago may be insufficient. To fulfil the current plans for electric transport development, we are considering a possible growth of the plant’s production capacity up to 12 GWh,” says Emin Askerov, general director of Rosatom subsidiary Renera.

The Russian nuclear corporation Rosatom announced plans to build the battery factory in the spring and at the time had taken a 49 per cent stake in Enertech International, a South Korean manufacturer of electrodes, lithium-ion cells and energy storage systems. In March, the first stage of production was expected to begin in 2025, but now there is talk of 2026.

The planned factory is to be built in Kaliningrad at the site of the local nuclear power plant near the village of Tuschino and will have a “preliminary staff requirement of 2,000 employees”. Rosatom’s subsidiary Renera, which specialises in the energy storage business, will be responsible for the construction and operation of the plant. Renera, in turn, is a subsidiary of TVEL Fuel Company, which in turn is part of Rosatom. The stake in Enertech is also officially through Renera.

“The construction of a large-scale plant for the production of energy storage is an important milestone for the implementation of our strategy for the development of new non-nuclear business areas, but also for the fulfilment of the government’s development concept for electric transport with a perspective until 2030,” says Natalia Nikipelova, President of TVEL Fuel Company. The production of the plant is to be purchased mainly by domestic car manufacturers, therefore the company will make an important contribution to the implementation of the government’s policy of import substitution. In other words, Russia wants to bring the electric vehicle supply chain into the country.