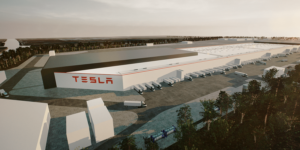 Tesla’s Gigafactory in Shanghai will apparently produce its 300,000th electric car this year. The upcoming annual general meeting of the Californian electric car manufacturer is also to take place at the production facility under construction in Texas. The date: 7 October.

A Reuters report says that Tesla wants to reach a cumulative production figure of 300,000 vehicles in China this year by the end of September. This fits with the news that there is to be a press event for members of the media at the Shanghai plant tomorrow, Wednesday, to witness the completion of the 300,000th vehicle this year. The date was made public by a Tesla observer on Twitter.

Tesla had already stated the Gigafactory 3 in Shanghai had an annual capacity of 450,000+ instead of 450,000 in its annual report when it released its Q2 figures. The company also announced that the site had completed its transition to a “primary vehicle export centre”. This means that European demand, among other things, is currently served from there. However, the 450,000+ figure also means that Tesla will have to increase output again in the fourth quarter.

Meanwhile, Tesla is planning its next virtual general meeting for 7 October – at its new factory in Texas, according to an official announcement. The choice of location fuels rumours that the start of production of the Model Y could be announced at the meeting.

In its second-quarter annual report, Tesla said it planned to start up the Texas Gigafactory this year. Literally, it said, “We believe we remain on track to build our first Model Y vehicles in Berlin and Austin in 2021.” But, “The pace of respective production ramp-ups will be influenced by the successful introduction of many new product and manufacturing technologies, ongoing supply chain challenges and regional approvals.”

Meanwhile, the construction of another Tesla manufacturing facility is attracting attention – and it’s in Lathrop, California. There, the company has begun construction of a ‘megafactory’ for stationary battery storage. This news is interesting against the background of the consideration that this could bring relief for the Gigafactory in Nevada in the future, where both electric car batteries and stationary storage are currently produced.