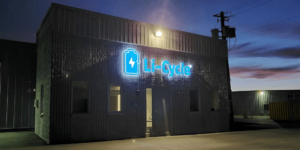 Koch Strategic Platforms, a subsidiary of the US-based Koch Investments Group, is making the $100 million investment via the purchase of a convertible bond. The company is a widely cited investor in a number of players in the battery industry, including Microvast, Solid Power and Freyr. As part of the investment in Li-Cycle, the two companies also plan to discuss opportunities for operational collaboration, such as through an engagement of Koch’s subsidiaries Koch Engineered Solutions (KES) or Optimised Process Designs Group (OPD).

“KSP’s investment in Li-Cycle will further fund and accelerate the growth of our lithium-ion battery recycling business in North America and globally. We are scaling our efficient and proven technology globally to grow in step with our customers and pursue new market opportunities,” expresses Ajay Kochhar, co-founder and CEO of Li-Cycle.

The company says that the pace at which new battery factories are being built is far exceeding initial expectations. Therefore, the company has recognised the need to accelerate the expansion of its own recycling capacities. This is exactly what the additional capital from KSP will now be used for.

Li-Cycle describes its recycling approach as a two-stage process using mechanical and hydrometallurgical or wet-chemical methods. With this approach, they are able to recycle all variants of cathode and anode chemistry within the lithium-ion spectrum without the need for sorting by specific chemicals, the Canadian company states.

The company now has four commercial recycling facilities in operation or announced. The first facility is located in Kingston, Ontario, Canada. A second facility (also the first in the US) was announced in September 2020 in Rochester, New York State, and is now operational.

The third recycling plant is being built in Gilbert, Arizona. According to an announcement from April 2021, a capacity of 10,000 tonnes of spent batteries per year is planned there. A fourth plant has also recently been announced for Tuscaloosa in the US state of Alabama. Operations there are expected to start in mid-2022 – with an initial processing capacity of up to 5,000 tonnes per year, which will later be expanded to 10,000 tonnes.

Li-Cycle also underlined its strong focus on North America in May with an agreement with Ultium Cells, the battery joint venture between General Motors and LG Energy Solution. Together, they plan to recycle “up to 100 per cent” of the material waste from the production of battery cells in the future, it was said at the signing of the agreement. The deal relates to battery cell production at the Ultium Cells plant in Lordstown, Ohio. The cells for the electric cars based on GM’s Ultium platform, which forms the backbone of the US carmaker’s electric vehicle offensive, are manufactured there. In Spring Hill, Tennessee, Ultium Cells is planning a second cell factory near the GM plant there. It is not yet known whether the recycling agreement will be extended to this location.

Hexagon Purus to take over Wystrach