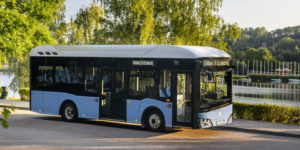 Solaris has added another electric bus to its portfolio. The new Urbino 9 LE electric is a nine-metre-long low-entry bus designed for inner-city routes and intercity routes and, according to the manufacturer, “represents an excellent link between urban and suburban transport in metropolitan areas”.

For today’s first appearance of the newcomer, Solaris again opted for an online premiere in an interactive format. The manufacturer made it clear that the Urbino 9 LE electric has been designed exclusively for zero-emission propulsion and, together with the already presented Urbino 15 LE electric, represents the fourth generation of vehicles at Solaris. As a particularly compact bus, the new model is expected to impress above all with its manoeuvrability and flexibility. The latter manifests itself, among other things, in the fact that the interior of the Urbino 9 LE electric can be adapted to the registration requirements of both vehicle class I and class II.

Let’s take a look at the data sheet of the newcomer: the nine-metre-long electric bus (to be precise, it is 9,270 mm) houses an electric, liquid-cooled central motor with a peak output of 220 kW, which transmits its drive power to the vehicle’s second axle. According to Solaris, the drive uses silicon carbide (SiC) components to reduce energy consumption. The manufacturer states that the maximum capacity of the batteries is over 350 kWh. The energy storage system is designed to be charged conventionally via a plug. Optionally, however, different types of pantographs can be mounted on the roof of the Urbino 9 LE electric. In addition to a conventional pantograph, Solaris mentions an inverted pantograph, which was not previously available for the 8.9 version, as well as a “completely new type of pantograph with a greater working height compared to competitors’ solutions”. This should be able to load vehicles of different heights.

The permissible total weight of the midibus is 16 tonnes. The maximum number of seats is 27 according to the two classes I and II, with spaces for wheelchairs and prams on board. All in all, the Urbino 9 LE electric can carry up to 73 passengers in Class I and up to 60 in Class II, depending on the vehicle equipment. Entry is via doors in the 1-2 arrangement.

Solaris further states that the new model can accommodate all air-conditioning systems in its portfolio, including a heat pump air-conditioning system. On-board safety and assistance systems include the so-called MirrorEye system, which replaces mirrors with cameras, and Blind Spot Assist (“Mobileye Shield+”). In addition, the Urbino 9 LE electric is designed for the integration of Solaris’ own fleet management system eSConnect.

According to the Polish manufacturer, first orders have already been received for the delivery of a total of 17 examples of the 9-metre model. Eight Urbino 9 LE electric are to go to Bolzano in Italy, and a further nine have been ordered by the Polish cities of Żyrardów (6 units), Cieszyn (2) and Zawiercie (1).

The Urbino 8.9 LE electric, which is almost the same size, made its debut ten years ago, according to Solaris. The Polish company’s press release states that the new addition is intended to complement rather than replace it. It says that the range will be expanded by a “more versatile and flexible midibus designed exclusively for zero-emission propulsion”.