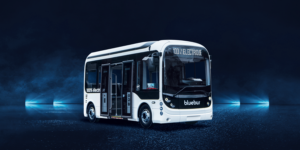 The French electric bus manufacturer Bluebus, part of the Bolloré Group, is presenting a new version of its six-metre short electric bus. This offers space for up to 35 passengers, a new drive with up to 140 kW of power and 25 per cent more range than its predecessor.

Around ten years after the premiere of Bluebus’ first 6-metre electric bus, the French manufacturer based in Brittany is presenting a comprehensively revised version of the minibus. The vehicle still has a solid-state battery from Bolloré’s sister company Blue Solutions on board. This now offers a capacity of 126 kWh and thus a range of up to 200 kilometres. Some time ago, we conducted a detailed interview with Jean-Luc Monfort, president of Bluebus and managing director of Blue Solutions, about the solid-state batteries from France, which are also optionally installed in Mercedes’ eCitaro.

With its compact dimensions of 5,940 mm x 2,655 mm x 2,923 mm, the new 6-metre bus is intended to make the operation of short routes with low passenger density profitable. The manufacturer specifies a drive power of 140 kW and a maximum speed of 70 km/h. The bus can be fast-charged. The short bus is not capable of fast charging. AC charging is supported by the built-in onboard charger with 22 kW and, according to Bluebus, should take 6.5 hours at a corresponding Type 2 plug. According to the company, the revised vehicle will also be “of interest to many manufacturers as part of the research and development of future autonomous vehicles”.

The French company emphasises that in addition to the improvement in battery and drivetrain, a now one-piece frame ensures a higher passenger capacity. As a result, the model can now carry 35 people. “All the new functions are integrated in this vehicle to meet the technological challenges of tomorrow’s mobility and to support the energy transition,” it says in a statement sent to us by email. On the latter aspect, Bluebus specifies, among other things, that the vehicle’s structure is 98 per cent recyclable.

Like its predecessor, the new Bluebus is manufactured in Brittany. The development of the new version was accelerated by funds from the state Corona stimulus package “France Relance”, they say. Bluebus currently employs 220 people at its headquarters in Ergué-Gabéric. The battery manufacturer Blue Solutions, which is also located there, employs another 300 people. In addition to the 6-metre version, the manufacturer also has a classic twelve-metre-long electric bus in its portfolio. This has recently been ordered on a large scale by the Paris public transport operator RATP, among others. This model also has solid fuel batteries from Blue Solutions on board as standard. According to Bluebus, more than 400 electric buses manufactured in Brittany are in use worldwide.