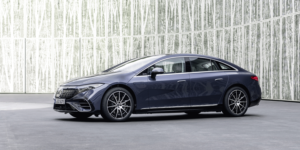 The city of Düsseldorf has cancelled its lease order for a Tesla Model S as an official car for Mayor Dr Stephan Keller because Tesla has postponed the delivery date several times. Instead, the mayor of Düsseldorf has now opted for the all-electric EQS from Mercedes-Benz.

With an all-electric range of up to 784 kilometres, the city administration said it is “even better than the Tesla S and is expected to be ready for delivery in early 2022”.
duesseldorf.de (in German)

Tesla pushes back in the USA