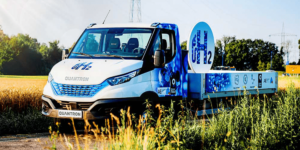 Quantron has presented a fuel cell transporter. The transporter, called Q-Light FCEV, is a hydrogen-powered vehicle in the 3.5 to 4.2 tonne range, according to Quantron, and is offered in cooperation with FC experts AE Driven Solutions.

The commercial vehicle converter had already announced a hydrogen transporter based on the Iveco Daily a little over a year ago. Now the vehicle was presented to a trade audience for the first time at NUFAM.

The Q-Light FCEV is supposed to be able to be driven “flexibly in electric or fuel cell mode”. The electric motor has an output of 100 kW. The maximum speed of the e-transporter is 90 km/h. A capacity of 37 kWh is specified for the battery. Incidentally, this can be charged with a charging power of 6.6 kW. The fuel cell itself has an output of 15 kW. With two tanks, a range of up to 300 km is said to be possible, and with four tanks up to 500 km. Approximately 2.1 kg of hydrogen can be stored per tank.

In future, the power of the fuel cell will also be scalable, so that the vehicle can be offered in different versions, such as a 7.2-tonne variant.