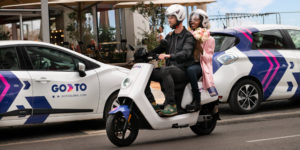 The Israeli company GoTo Global Mobility is taking over the Berlin-based electric scooter sharer Emmy. The acquisition is meant to expand GoTo Global’s European presence to reach its goal of expanding to every major European city by 2025.

GoTo Global Mobility wants to make Emmy’s electric mopeds the core of a multimodal fleet of cars, vans, electric mopeds, electric scooters and e-bikes, all of which can be booked via an app. Customers should be able to make use of this offer from the middle of next year onwards.

Go To Global has said it was particularly interested in the 300,000 existing customers of the Berlin-based provider. Emmy is currently active in three cities with around 3,000 electric mopeds in Berlin, Munich and Hamburg. For Emmy’s existing customers, the acquisition will be evident from 2022 onwards in the form of an expanded, multimodal offering.

The takeover price was not revealed but Handelsblatt quotes Gil Laser saying that the German Emmy team and its founders Valerian Seither and Alexander Meiritz are going to implement the conversion to the Go-To model in the three Emmy cities and then also lead the expansion into the Netherlands, keeping the existing crew onboard.

One big change for Emmy is the addition of combustion engines in the fleet: although Emmy is a strictly electric company, GoTo Global has not yet made any commitment to zero-emission vehicles in any of the statements made surrounding this takeover. So far, the Israeli company has relied on a mix of both combustion engine and BEV cars in its fleets, with the only zero-emission car being the Renault Zoe, among other combustion models. Theoretically though, despite the lack of clear zero-emission targets, the GoTo Mobile strategy of leasing, rather than owning its fleets, should more easily enable a full transition to entirely electric vehicles. Until now, while all of the cars in its fleets have been leased, the Israeli company still owns its own micromobility vehicles. CEO Gil Laser told TechCrunch that he eventually wants to lease all of the micromobility vehicles in the future too.

The zero-emission German company Emmy was founded in 2015. Initially, the electric moped sharing provider operated under the name eMio before it changed its name in spring 2017. Within a few years, Emmy had expanded to a handful of German cities, but the Corona pandemic hit the company hard from spring 2020 – the number of bookings and thus turnover plummeted. According to an early report by the German startup magazine Gründerszene, Emmy only coped with the effects of the health crisis by withdrawing from some cities and focusing on the core locations of Berlin, Munich and Hamburg. Among other things, the startup let its contracts expire for white-label solutions in Düsseldorf (Eddy) and Stuttgart (Stella-Sharing). A pilot project in Vienna was also abandoned.

In Gil Laser, Emmy recovered thanks to a Series C financing round that brought the company a low double-digit million amount. In addition, the sharing provider announced in May 2021 that financier Wunder Capital would support a fleet expansion with 1,500 new Yadea G5L e-scooters – this debt will now be inherited by GoTo Mobile. Now, with the takeover by GoTo Global, Emmy reported in an emailed statement to elective that the plan over the next few months is to drive the technical integration of the GoTo Mobile platform forward and to prepare the expansion of the fleet.

GoTo Global is currently active in Israel, Spain and Malta. After Germany, the Netherlands, the company is going to add Portugal and Italy to the list. The Israeli company says it is aiming to become the market leader in Europe for multimodal sharing offers. The company is expecting this to be profitable, saying that GoTo Global’s revenue should double to $50 million in 2022 and reach $116 million by 2023.

GoTo Global has been around since 2008, with 200 employees and 5,000 vehicles in Isreal, Spain and Malta to date. The Israeli company has developed a proprietary app to book various vehicles. GoTo has MoUs with Renault, Toyota, Nio and Segway.

GoTo says that, while its main customer base is made up of commuters, the company is actively targeting business customers. The aim here – as is often advocated by sustainable transport experts here in Germany – is to get companies to offer employees benefits in the form of multimodal subscriptions or mobility wallets. Another strategy is for companies to reserve dedicated fleets for their employees between specific work hours like between 9-5 after which the fleets would go back to being available for communities, Laser told TechCrunch.

As for the multi-modal approach with which GoTo Mobility is ambitiously aiming for European market dominance, competitors are already well onto this strategy. In fact, mobility service FreeNow from German carmaking giants Daimler and BMW – who incidentally also have clear zero-emission targets, is already using the classic retro electric mopeds from Emmy, which are electric versions of East Germany’s iconic scooters that used to zip through Berlin streets before the fall of the Berlin Wall.

Prior to the acquisition, GoTo Global secured $22.5 million in a Series B funding round. Currently, the next investment round is already underway to finance further expansion in Europe.