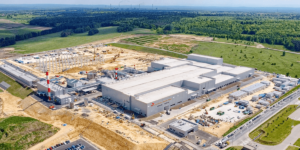 SK IE Technology (SKIET) has officially opened its first of a total of four planned production facilities for separators for use in electric car batteries in Poland. The subsidiary of the South Korean battery cell manufacturer SK Innovation plans to start production there this year.

The first separator plant in Poland is expected to have an annual capacity of 340 million square metres of separator film, enough to equip around 300,000 electric cars. Test operations are currently underway, but mass production is to follow in the fourth quarter at the first Polish SKIET plant. Separators are the components in lithium-ion batteries that – as the name suggests – separate the cathode from the anode. It therefore prevents contact between the electrodes, which would cause a short circuit, while lithium ions can move freely between the electrodes. SKIET specialises in wet process separators. There are also dry-process separators, whose method of manufacture differs accordingly.

All four plants announced by SKIET will be built in the Silesia region of Poland. The commissioning of the second plant is scheduled for the first quarter of 2023. The South Korean company also give the annual capacity there as 340 million square metres. Plants 3 and 4, which were announced in spring, will be larger and will each be able to produce 430 million square metres of separators per year. Commissioning is planned for “Q4 2023 – Q2 2024”. The investment in the latter duo amounts to 1.13 trillion won, equivalent to about 850 million euros.

On the occasion of the opening of the first plant, Rho Jae-sok, CEO and President of SK IE Technology, commented as follows: “The operation of the first European plant has positioned the company as the first battery separator producer in Europe. We will take a significant part in revitalizing the global electric vehicle market.” The manufacturer describes Poland as its “European production base” and has already received so many orders that the entire initial output of the four factories has already been bought.

The first delivery address is group sister SK On, the new battery division of the Group that was spun off from the South Korean battery cell manufacturer SK Innovation on 1 October. It already has two cell factories in Poland (the second plant in Komárom is still under construction) and announced a third battery cell factory in Iváncsa at the end of January. The separators are likely to be integrated directly into the cell production there.