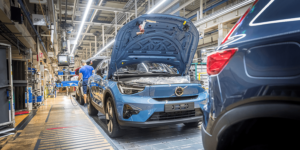 Volvo Cars has started production of the C40 Recharge at its plant in Ghent, Belgium. It is the first Volvo model to be offered exclusively with electric drive.

The XC40 Recharge, the all-electric version of Volvo’s compact SUV model, is also built in Ghent. Introduced in March 2021, the C40 Recharge is marketed by Volvo as a standalone model but is in effect the SUV coupe to the XC40 Recharge – albeit with minor visual changes beyond the flatter rear end.

While Volvo now also offers the XC40 Recharge in a front-wheel-drive version, the C40 Recharge is only available with the familiar all-wheel drive at market launch: one 150 kW electric motor each on the front and rear axle brings the C40 to a system output of 300 kW. The electricity is stored in a 78 kWh battery (gross, 75 kWh net). The standard range is said to be around 440 kilometres.

The Belgian plant is one of Volvo’s largest locations; in addition to the all-electric C40 Recharge, the XC40 models (BEV, PHEV and combustion engine), which are also based on the CMA platform, are built there, but also the V60 estate, which is based on the larger SPA platform.

As Volvo is known to want to become an all-electric brand by 2030, production will also be adjusted: In the wake of the model launch of the C40 Recharge, Volvo is increasing its production capacity for electric vehicles in Ghent to 135,000 units per year – the company expects more than half of all vehicles produced at the site to have an all-electric powertrain as early as 2022. In Ghent, the Swedish company also set up a battery assembly plant to combine the purchased modules into ready-to-install packs.

“The C40 Recharge is a car that represents our future,” said Javier Varela, Senior Vice President, Industrial Operations and Quality at Volvo Cars. “Our manufacturing operations and a close collaboration with our suppliers are key in achieving our future ambitions in terms of electrification and climate neutrality.”