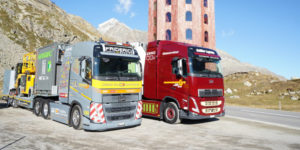 Four Swiss partners have joined forces to convert and operate two Futuricum electric trucks into special vehicles. The two examples feature an additional length of one metre, an increase of the payload by two tonnes and the expansion of the battery capacity to 900 kWh.

In addition to the Designwerk Group, to whose brands Futuricum belongs, the transport service providers Galliker Transport and Friderici Special as well as the construction machinery rental company Avesco Rent are involved in the project. In addition, the Swiss Federal Roads Office (ASTRA) has granted an exemption for both examples, so that the modified electric trucks are allowed to operate on public roads. This special permit dates back to the spring.

So far, the vehicles that Futuricum has delivered in Switzerland and abroad have batteries with up to 680 kWh, which is sufficient for most applications. As Designwerk announced back in March, “various customers have expressed that further distances are desired and are very interesting from both an ecological and economic point of view”.

The problems that Futuricum would have to install larger batteries for this, but this was not possible with the regular axle spacings. Therefore, Designwerk had applied to FEDRO for an exemption for two 40-tonne models, which has now been approved. The manufacturer is not interested in a massive overlength, but rather, as mentioned at the beginning, an additional length of one metre.

“This gives us the opportunity to place the battery packs on tractor units and car transporters both between the axles and behind the driver’s cab,” said Designwerk CEO Adrian Melliger. “With this additional metre, we can install up to 900 kWh of battery capacity and achieve a competitive range even in the logistics sector.”

As Designwerk made public in a recent announcement, the two electric 40-tonne tractor units have now been completed and have left production for Friderici Special and Galliker Transport. “With the completion and presentation of these vehicles, we have reached a milestone. Thanks to the installation of 900 kWh battery capacity, we are increasing the radius of action in the logistics sector and enabling particularly energy-intensive applications such as in heavy and special transports,” says Melliger.

Incidentally, since early summer Futuricum has already received a third order for the 900 kWh truck. As the Swiss haulage company Krummen Kerzers announced at the beginning of June, they had ordered such a vehicle. The electric truck will have a range of 500 kilometres.

The Designwerk Group has been completely dedicated to the installation of electric drives in the production of its vehicles for about twelve years. The Swiss company is primarily active in the development, prototyping and manufacture of low-volume niche products across the entire spectrum of industrial electromobility. This niche know-how has recently led to the entry of the Volvo Group, which has now taken over 60 per cent of the shares in Designwerk Technologies AG.

The Volvo Group is the commercial vehicle group with trucks, buses, construction machinery and marine division, not the car manufacturer Volvo Cars, which belongs to Geely. However, Geely also holds a minority stake in Volvo Group. Designwerk and Volvo Group have been working together for several years, with many of the Futuricum vehicles based on Volvo chassis. It was only at the end of December 2020 that the two partners announced that they would extend their cooperation to Germany.