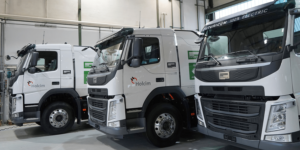 The Volvo Group has announced that it will acquire 60 per cent of the shares in Designwerk Technologies AG. The Swiss company offers electric vehicles under the Futuricum brand and also develops modular high-performance batteries and mobile charging technology for electric vehicles.

The Volvo Group is the commercial vehicle group with trucks, buses, construction machinery and marine division, not the carmaker Volvo Cars, which belongs to Geely. However, Geely also holds a minority stake in Volvo Group.

Designwerk and Volvo Group have been working together for several years, with many of the Futuricum vehicles based on Volvo chassis. It was only at the end of December 2020 that the two partners announced that they would extend their cooperation to Germany.

Now the cooperation will become even closer when the Swedes take over the majority. According to Volvo, the transaction is expected to be completed in the coming weeks. Designwerk Technologies will continue to operate as an independent company.

Volvo Group is focusing heavily on the electrification of its offering and had created a new business unit for this purpose in January. In March, the Swedes also invested in the Israeli start-up Driivz, which has developed a platform for the comprehensive management of large charging systems for electric vehicles.