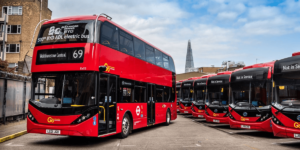 The UK government wants to introduce a new mandate requiring manufacturers to sell an increasing percentage of emissions-free vehicles each year from 2024 onwards as part of its new Net Zero Strategy.

To prepare for the incoming ICE sales ban in 2030, the UK government is working on a step-by-step plan to transform the energy economy. The new Net Zero Strategy, thusly named to help the government achieve net zero emissions by 2050, includes investment and legislation across the economy. New funding commitments include an extra £350 million to support the electrification of UK vehicles and their supply chains. The government claims the strategies will secure 440,000 jobs and “unlock” £90 billion in investment in 2030. The ban has support from local fleets as well, making the move more political than economical. However, there is a loophole, as trucks will be allowed to continue to be sold with an internal combustion engine for an extra decade.

Unlike most political BEV strategies, the UK has found that they “cannot rely on the electrification of road transport to achieve net-zero emissions and that in recovering from the pandemic, it will be essential to avoid a car-led recovery”. To come out of the pandemic greener than they went in, the government now aims to increase the share of public transport, walking and cycling trips. To achieve this, the government will invest more than £12 billion in local transport systems. £3 billion will be invested in the National Bus Strategy, creating integrated networks, more frequent services, and bus lanes to speed journeys and support the acquisition of 4,000 new emissions-free buses and the infrastructure needed to support them. An additional investment of two billion pounds will be put in “cycling and walking, building first hundreds, then thousands of miles of segregated cycle lane and more low-traffic neighbourhoods.”

In addition to the new mandate and funding commitments, a further £620 million for targeted electric vehicle grants and infrastructure has been set out, focusing on local on-street residential charge points.