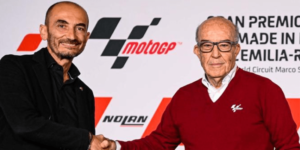 Shortly after the announcement of Energica’s withdrawal as the exclusive supplier of electric motorcycles for the MotoE racing series after the 2022 season, the successor has been decided: Ducati will be the sole manufacturer from 2023 to 2026.

MotoE will continue to be held in World Cup status, not as a World Championship, as Dorna Sports, the commercial rights holder of the MotoGP World Championship, has announced. Ducati CEO Claudio Domenicali nevertheless spoke of a “historic moment” for the Borgo Panigale, Bologna-based company. “Ducati is always focused towards the future and every time it enters a new world it does so aiming to create the best-performing product possible,” Domenicali said. “This agreement comes at the right time for Ducati, which has been studying electric powertrains for years, as it will allow us to develop within a controlled field: that of competition.”

Ducati had launched electric-powered folding bikes and pedal scooters in 2020 under the name Ducati Urban e-Mobility. Back in 2019, Domenicali had confirmed that Ducati was developing an electric-powered road bike. So now it will be an electric race bike first. There are no technical data on this yet – the model is to be developed and tested in 2022.

Incidentally, the head of the Audi subsidiary stated that the development goal was to make the motorbike as light as possible for the MotoE. Industry observers see this as a clear jab at the previous sole supplier, Energica. Their motorbikes were criticised for their high weight and short range – in some cases the races only lasted five to seven laps. “Lightweight machines have always been part of Ducati’s DNA, and thanks to the technology and chemistry of the batteries, which are developing rapidly, we are sure we can achieve excellent results,” says Domenicali.

Ducati will also be able to draw on technologies from the VW Group. The brand is known to belong to Audi, but could presumably also use the technology for high-performance cells that Porsche is developing as part of the Cellforce joint venture.

As Dorna boss Carmelo Ezpeleta indicated at a press conference ahead of the MotoGP race in Misano, Italy, Dorna had been negotiating with several of the manufacturers involved in MotoGP over the past two years about entering MotoE – currently Japanese manufacturers Honda, Suzuki and Yamaha, as well as KTM from Austria and the two Italian factories Aprilia and Ducati. “Their project has convinced us in all areas,” said Ezpeleta.

How long the races with the increased range can become and what lap times are possible with the lighter electric motorcycles is still unclear. However, Dorna Sports wants to stick to the basic concept of MotoE: Ducati will not market the electric motorbikes itself, and only private teams will continue to be active in the MotoE.