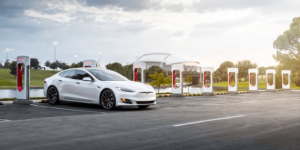 Tesla wants to triple the size of its global fast-charging network within the next two years. This was announced by Tesla manager Drew Baglino during the investor conference on the latest quarterly figures.

“The network has doubled in the last 18 months, and we are planning to triple it over the next two years,” Baglino said. At the end of September, Tesla had 3,254 Supercharger locations worldwide with 29,281 charging points, according to the quarterly report. Compared to Q3 2020, this means the charging network grew by about 50 per cent, but deliveries increased by 73 per cent.

According to Baglino, Tesla’s senior vice president of powertrain and battery engineering, the expansion is intended not only to open up new areas, but also to redensify regions that are in particularly high demand. “On the Supercharger side, the supercharging team monitors congestion and plans expansion to ensure customer experience with minimal wait times alongside the growth in our vehicle fleet,” Baglino said. “While we certainly have work to do in expanding capacity in some congested areas, average congestion on the network has decreased over the past 18 months. Nonetheless, we’re not standing still.”

To compensate for “existing congestion” in some locations, Tesla plans to take several measures. For one, mobile Superchargers are to be additionally installed in some cases. Secondly, Baglino announced pricing strategies “that encourage greater usage outside of peak hours to avoid waiting times”. However, he did not specify the level of such flexible pricing.

The fact that Baglino is now announcing “accelerated expansion worldwide” is not only due to the slower growth of the Supercharger network compared to deliveries. The opening of the Superchargers to electric cars from other brands, announced in the summer, is likely to drastically increase demand and utilisation, while – as Baglino has admitted – some locations are already overloaded with Teslas only. Baglino did not provide details or a further timetable for the opening in the investor call.

In addition, President Joe Biden’s announced infrastructure plan is likely to play a role, at least in the US. The plan also provides for high subsidies for the charging infrastructure – but on the condition that not only vehicles of one brand can use the stations.

On the European side, Tesla updated its map of charging stations at the beginning of August. According to this, 55 new Supercharger locations are planned in Germany, which means that after this expansion there would be around 145 locations there. The tripling announced by Baglino is probably not yet included in this figure.

BlackRock could pump half a billion euros into high power charging