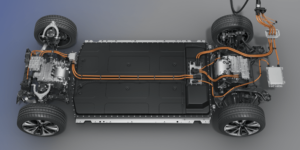 Chinese electric car manufacturer Xpeng announced several innovations at its Tech Day, including an 800-volt electric car platform with silicon carbide technology and a fast-charging station with up to 480 kW of charging power.

Basically, Xpeng only touched on all its product and innovation news at the Tech Day. There is therefore no detailed background information. Regarding the electric car platform, the Chinese start-up only specifies that it is an 800-volt architecture with integrated SiC technology and that it is designed for energy currents of 600 A at peak. When fast-charged with an appropriate charger, vehicles based on the new platform should have enough current to cover a range of 200 kilometres in five minutes.

By way of comparison, the Hyundai Ioniq 5, which is currently one of the electric vehicles with the fastest HPC charging capability with its 800-volt technology, along with models such as the Kia EV6 or the Audi e-tron GT, is said to be able to be recharged for 100 kilometres in just under five minutes.

But back to Xpeng: to complement the EV-platform, the company has announced the launch of a “lightweight 480-kW high-voltage charger”. This is to be accompanied by the launch of buffer storage solutions for charging stations or in “mobile electricity storage vehicles”. Xpeng currently operates 439 of its own HPC charging stations in China. According to CEO He Xiaopeng, the goal is to “cover all cities and most highways in China” in the next two years.

Among the other innovations Xpeng presented at Tech Day were a new version of its XPILOT intelligent driver assistance system and the design of a next-generation flying car from its subsidiary HT Aero, which is due to be launched in 2024.

Briefly on the driver assistance system, the current XPILOT 3.0 is expected to be replaced by the newer version 3.5 in the first half of 2022. This is said to have a “quadruple perception fusion solution” including lidar and millimetre-wave radar sensors. However, this version is likely to have a short lifespan: Xpeng has already announced the successor version 4.0 for the first half of 2023. This will be characterised by a comprehensive hardware upgrade and 508 TOPS (“Tera Operations Per Second”) computing power, says Xpeng.

Finally, Xpeng unveiled the latest design draft of the flying car of its subsidiary HT Aero. Formerly called Xpeng Heitech, the company reportedly plans to bring electric flying cars to market from 2024, and just recently raised more than half a billion US dollars from a range of investors in a Series A funding round. The company plans to invest the capital in its research and development and in expanding its workforce, among other things.