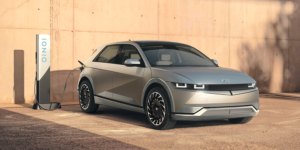 Hyundai has just presented the Ioniq 5, its first production model based on its E-GMP platform. While the electric SUV has impressive technical data, the angular design will probably polarise.

++ This article has been updated. Kindly continue reading this article below. ++

Prices for the Project 45 models will start at £45,000 in the UK (including the Plug-In Car Grant). Pricing for the rest of the IONIQ 5 range will be confirmed in due course.

After the ‘Concept 45’ presented in 2019 and the information on the new, modular electric platform was published in December 2020, Hyundai is now revealing the first fairly concrete data on the production model: Hyundai will offer the Ioniq 5 with two battery sizes, each of which will be available with rear-wheel drive and all-wheel drive.

The vehicle is based on an 800-volt architecture, running on a larger battery has an energy content of 72.6 kWh, and the rear-wheel-drive version with only one electric motor is supposed to achieve ranges of up to 500 kilometres. The smaller battery with 58 kWh should still provide power for around 400 kilometres. Official WLTP values are not yet available, since the vehicle has not yet been homologated.

According to Hyundai, the development is not yet complete, especially since the suspension is still fine-tuned. This is why they say that the height of 1.605 metres given so far is not yet final. With differently designed springs and dampers, the vehicle height – and thus the air resistance and consumption – could still change.

The drive’s performance data is already certain: with the small battery, the RWD produces 125 kW, the all-wheel-drive model comes to 173 kW. With the large battery, the single-motor version offers 160 kW, and together with the second motor on the front axle, the top model of the range comes to 225 kW – that is 306 hp in the old world. The rear engine offers 350 Nm of torque in all variants, with another 255 Nm added for the all-wheel-drive models, resulting in 605 Nm of system torque. The top model is said to accelerate to 100 km/h in 5.2 seconds, while the entry-level model takes 8.5 seconds. All four versions are said to have a top speed of 185 km/h.

The Ioniq 5 will also have a trailer coupling. Hyundai says it is aiming for a towing capacity of 1,600 kilograms for the all-wheel-drive versions, but the drawbar load was not mentioned. The towing capacity of the RWD versions has not yet been revealed.

The battery itself is also interesting: Hyundai is not using ‘classic’ lithium-ion cells with liquid electrolyte, but lithium-polymer batteries. The polymer-based electrolyte is solid to gel-like, depending on the design. Hyundai has not gone into more detail here, but it should be a gel-like electrolyte, as solid electrolyte films usually only achieve sufficient ion conductivity at an operating temperature of around 60 degrees, which is an impractical limitation in a car. One of the advantages is that the cells can be flatter, and a solid housing is not necessarily required. This means that the energy density of the ready-to-install pack can be increased.

However, what remains to be seen is with which charging offer Hyundai will accompany the Ioniq 5 in Europe. At the presentation, Hyundai Motor Europe said that charging with Ionity will be possible via the DCS-operated charging service ‘Charge My Hyundai’. That being said, Hyundai Motor Germany has not introduced Charge My Hyundai, as there is already existing charging cooperation with EnBW in Germany. EnBW famously removed the Ionity charging points from its charging service after the price increase at the beginning of 2020.

As to the electric cars design, the Ioniq 5 has adopted the 2019 concept car’s many design features. The angular body is likely to polarise. Hyundai design chief Luc Donckerwolke made it clear that in times of “excited surfaces”, the aim was to achieve a particularly calm design with clear lines. This appears to be a one-off design since the Ioniq 5 will not be a blueprint for other electric Hyundais. European design chief Thomas Bürkle added that they wanted to give each vehicle its own character and not offer the same design in different sizes.

As in other electric vehicles, the front is almost completely closed. At the lower air intake, the Ioniq 5 even has active fan flaps, which only open when the battery needs cool air. Otherwise, the intake is closed for better air circulation. The front bonnet has also been designed to extend to the side of the wheel arches. This is to avoid unnecessary gaps that would disrupt the airflow. For this reason, Hyundai has also installed flush-fitting door handles. Unlike the study, however, the production model comes with conventional exterior mirrors for the time being – but camera mirrors will likely be offered later.

The visually suggested radiator grille between the headlights is a closed sensor area. The Ioniq 5 is said to get the most advanced version of ‘Highway Driving Assist’, supposedly enabling safe lane changes on the motorway.

In addition to a classic metal roof, the Ioniq 5 will likely be available with two options since both a panoramic glass roof and a solar roof were shown at the presentation. The integrated solar cells can directly charge the battery. In southern Europe tests, they are said to have generated electricity for five to six kilometres of range per day, which is why Hyundai gives a figure of up to 2,000 kilometres per year. In Germany, it will probably be somewhat less due to the weather on an annual average.

We still don’t know exactly what the offers for the roof options will look like in each region. At Hyundai, the respective national companies can select the equipment lines and options themselves. This means, for example, it is up to Hyundai Motor Germany whether the glass or solar roof is linked to certain equipment or a specific engine version, or whether it can be ordered freely as an individual option for each version in Germany. As a rule, the national companies try to bundle the most popular equipment to simplify production and logistics.

What is certain is that the Ioniq 5 will have a fully digital cockpit. Two 12.25-inch monitors are fitted at the factory – one as an instrument display for the driver behind the steering wheel, a second as an infotainment centre to the right. Some functions, such as the air conditioning, are still controlled via buttons located below the infotainment touchscreen. There will also be a 44-inch head-up display with augmented reality functions, although here too, for each country, it depends on what the national Hyundai dealer decides on model policy on how and in which functions the HUD can be ordered. The same also applies to the heat pump.

According to chief designer Donckerwolke, the interior itself has been designed more like a living room. The E-GMP offers the designers a completely flat interior floor without a transmission tunnel. There is no centre console between the driver’s and passenger’s footwells. The shelf installed between the seats is quite flexible and can be opened and unfolded in different ways, turning the upholstered armrest into a small table.

Hyundai’s front seats are called ‘Zero Gravity’ seats and are supposed to flexibly movable into a particularly comfortable position during charging breaks. Another striking feature of the seats is the relatively thin backrest, which is supposed to increase rear-seat passengers’ legroom. The rear seat itself can be moved by up to 20 centimetres depending on whether more legroom or luggage compartment volume is desired.

With a wheelbase of exactly three metres, the Ioniq 5 is on a par with some luxury-class saloons and should offer ample interior space. The vehicle’s overall length is 4.63 metres, and the front and rear overhangs are extremely short.

In its standard configuration, the luggage compartment holds 540 litres; when the rear seat backrests are folded down (a 60:40 ratio is possible), the load volume increases to up to 1,600 litres. This puts the Ioniq 5 exactly on a par with the VW ID.4, which can hold between 543 and 1,575 litres. At 4.58 metres, however, VW’s e-SUV is slightly shorter. Unlike the ID.4, the Ioniq 5 has a frunk under the front bonnet where the charging cable can be stored, for example.

As already described at the presentation of the E-GMP in December, the platform has what is called a Vehicle2Load function. The bidirectional Integrated Charging Control Unit replaces the conventional AC on-board charger. This means that another electric car, for example, can be charged via the Ioniq 5’s charging port (which, incidentally, is located at the rear right). Using an adapter plugged into the charging port, it should also be possible to supply 220-volt devices up to 3.6 kW. This will be useful for tradespeople with electric tools and an electric barbecue for camping or picnics. A 220-volt socket is also installed in the interior under the rear seat.

Based on the Concept 45 study, there will be a limited special edition called Project 45 for the market launch, which will be offered in selected markets. The special model will be built exclusively with a long-range battery and all-wheel drive. After the Project 45 special model, all four drive options will then be offered. The prices for these have not yet been revealed.

Production in South Korea is scheduled to start in the first quarter. The first vehicles of the special model are then expected in the markets in early summer.

Update 08 May 2021: Hyundai has announced UK pricing and specifications for the new Ioniq 5 electric crossover. Prices will start from £36,995, with the market launch set for later this year. Three different model variants will be available, in addition to the limited Project 45 launch edition.

The SE Connect version will pack a 58kWh battery and a rear-wheel-drive configuration, delivering 167bhp. The manufacturer promises a combined range of 240 miles and acceleration of 0-62mph in 8.5sec. Additionally, each version is now fitted with 800-Volt battery technology, allowing for 350kW DC rapid-charging.

The Premium version of the Ioniq 5 starts from £39,295 for a 58kWh battery and rear-wheel-drive. A larger 73kWh battery pack is also available, but raises the price to £41,945  and delivers the best range of the line-up at 300 miles. Buyers can also add a dual-motor four-wheel-drive for a cost of £45,145, bringing faster acceleration but a lower maximum range of 287 miles.

The top-spec Ultimate trim prices begin at £42,295 for the rear-driven 58kWh powertrain and stand at £48,145 for 73kWh and four-wheel drive. The most powerful model version features combined power of 302bhp, allowing for acceleration from 0-62mph in 5.2sec. The top speed is 115mph, while maximum range is 268 miles for the Ultimate trim.

Next to the 800-volt battery technology, the models also all feature V2G capabilities, which are currently still somewhat rare on the automobile market.

Update 05 June 2021: The Hyundai Ioniq 5 is now available to order in the UK, priced from £36,995. It is available for order immediately with the 58 kWh and 73 kWh battery packs, as well as with RWD or AWD powertrains. This includes all versions; SE Connect, Premium and Ultimate models available. Deliveries are expected to begin from the middle of summer.

Sales for the new model have been picking up quickly, as Ashley Andrew, Managing Director of Hyundai Motor UK explains: “The IONIQ 5 is a watershed moment in the history of Hyundai, as the very first model built on our new Electric Vehicle-dedicated platform. Demand for IONIQ 5 in the UK and across the world has been staggering, and we’re excited to be able to open order books today to our customers.”