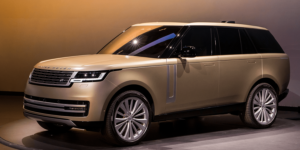 Land Rover has presented the fifth generation of the Range Rover. At the market launch next year, this will receive two plug-in hybrid variants with 324 and 375 kW respectively and a purely electric WLTP range of up to 100 kilometres. The manufacturer has announced a purely electric Range Rover for 2024.

The new Range Rover is based on the MLA-Flex, Jaguar Land Rover’s modular longitudinal architecture. The purely electric successor to the Jaguar XJ is also to be based on this platform – this was announced for 2020, but has not been presented to date. However, the electric limousine is likely to come onto the market before the purely electric Range Rover, after all, Jaguar is to become a pure electric vehicle brand from 2025.

For Land Rover, the switch to exclusively electric powertrains is so far planned for 2036. The fifth Range Rover generation, which will also be offered with seven seats for the first time, will probably be replaced by Generation 6 by then. With the BEV version of Generation 5 from 2024, the Range Rover is likely to be one of Land Rover’s first e-models – these are reportedly announced for 2024. However, the electric Range Rover is unlikely to feature the announced 800-volt technology: This is said to be for the Electrified Modular Architecture (EMA), and there is no word yet on the MLA.

With regard to the plug-in hybrids, the British brand does not yet provide any further data apart from the system performance – except that the WLTP range of over 100 kilometres should correspond to around 80 kilometres of electric driving performance in practice. The size of the battery, charging capacity etc. are not yet known. The PHEV variants are not yet available to order; in the configurator there are only three diesel mild hybrids, a petrol mild hybrid with a 3.0-litre in-line six-cylinder and a 4.4-litre V8 without any electrification.

Visually, the fifth generation is also easily recognisable as a Range Rover. The front has only been moderately adjusted and could almost just pass as a facelift. The LED signature is now more angular, as is already the case with the smaller Range Rover Evoque, for example. The rear, however, has been redesigned: the narrow LED rear lights are now integrated into the bodywork in such a way that they are hardly noticeable.

Prices for the PHEV versions are not yet known. The five-seater with normal wheelbase starts at 121,000 euros for the 183 kW diesel. Optionally, there is a long-wheelbase version, which is also available as a seven-seater. Depending on the equipment, however, only two more comfortable single seats are installed in the rear instead of the bench seat, turning the Range Rover into a four-seater.

With the large SUVs and SUVs (currently without an electric variant) Jaguar Land Rover usually achieves high fleet consumption or CO2 emissions. Additionally, Jaguar Land Rover wants to join Tesla’s CO2 pool for 2021. Another member of this pool is already Honda. According to the data, JLR achieved about a quarter of its sales with PHEV powertrains from January to August – but given the CO2 levels of the remaining three quarters, not enough to reach the JLR fleet target of 131.8 g/km CO2.

The entire model portfolio of the fifth generation Range Rover presented last autumn is available to order now – including the plug-in hybrids with extended range, which enable up to 113 kilometres of pure electric driving according to WLTP measurements (combined).

The new plug-in hybrids are available in two versions in the new Range Rover, as the P510e and P440e. The latter starts at prices from 132,500 euros, the P510e is available from 148,600 euros. Both are the basic prices in the HSE equipment. With higher equipment lines or the long wheelbase, both PHEV versions become significantly more expensive. In the “First Edition” with long wheelbase, for example, the P440e costs 166,900 euros, but neither variant is currently listed in the configurator as a seven-seater.

Tesla opens first R&D centre outside the USA in Shanghai