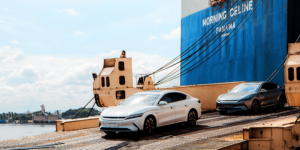 First to the stock market news: BYD finalised a placement agreement for a planned offering of 50 million additional shares in Hong Kong after the close of trading on Friday. This is according to a recent announcement by the company. The advised price is 276 Hong Kong dollars per share (equivalent to 30.65 euros), which, extrapolated to the 50 million shares, makes a total volume of 13.8 billion Hong Kong dollars. That is the equivalent of about 1.53 billion euros.

According to BYD, the funds will be used to increase working capital, repay interest-bearing debt, invest in research and development and for general corporate purposes.

The news of the capital raising on the stock exchange came at the same time as the announcement of the Q3 financial figures. According to the statement, BYD posted the best quarterly sales in its history, but lost a good quarter of its profit (-27.5 per cent) compared to the third quarter of 2020. Specifically, the Chinese manufacturer’s Q3 revenue was around US$8.5 billion, while its profit was US$203 million. The gross margin fell for the fourth quarter in a row to 13.33 per cent. This is 40 percentage points below last year’s Q3 figure.

To interpret, the increased sales are accompanied by climbing BEV and PHEV vehicle sales. In the first nine months of the year, BYD sold a total of 337,600 vehicles. At the same time, BYD is facing massive costs in the face of the ongoing chip shortage and a recent increase in electricity tariffs, which is squeezing profits. According to the international offshoot Yicai Global of China’s Yicai Media Group, the Shenzhen-based company plans to raise the price of its electric car batteries by 20 per cent due to increased production costs, among other measures.

Meanwhile, BYD announced in a statement that it plans to expand sales of its Han electric sedan to a number of countries in Latin America and the Caribbean. The first examples of the electric car have recently arrived in Brazil, Mexico, Colombia, Uruguay, the Dominican Republic, Costa Rica and the Bahamas, according to the company. The BYD Han will also be offered in Europe in the future.