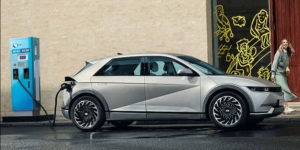 According to a South Korean media report, Hyundai is already planning an upgrade for its electric model Ioniq 5, which was launched on the market only a few months ago, to be offered from the beginning of 2022. The upgrade will apparently focus on the larger of the two battery options.

As the Korean portal ETNews reports, citing an internal event at which the new Ioniq 5 version was presented, it is primarily the capacity of the larger battery that will increase. So far, the Hyundai Ioniq 5 has a capacity of 72.6 kWh. By integrating two additional modules (32 instead of the previous 30 modules), the capacity is to grow to 77.4 kWh – and thus to the level of the large battery in the Kia EV6. The smaller battery option with 58 kWh will not be adapted.

Both the EV6 and the Ioniq 5 are based on the Hyundai Motor Group’s new electric platform, the E-GMP. Since the Ioniq 5 has a wheelbase that is ten centimetres longer than the EV6 at an even three metres, there is enough space in the vehicle’s underbody for two additional battery modules. Especially since the US version of the Ioniq 5 was announced from the start with 77.4 kWh.

It is not clear from the article exactly what WLTP range the Ioniq 5 will achieve with the larger battery. ETNews only writes that according to the Korean standard cycle, the range at room temperature will increase from 423 kilometres to 480 to 490 kilometres. Since the Ioniq 5 with its large battery and 160 kW rear-wheel-drive already has a WLTP range of 481 kilometres, a standard range of over 500 kilometres seems quite possible. By comparison, the EV6 with its 77.4 kWh battery, rear-wheel drive and 19-inch wheels has a range of 528 kilometres.

According to the report, there will also be an OTA update. According to ETNews , there will be changes to the infotainment, the control system, driving assistance systems, the suspension or the airbags. Here, the point suspension wounds, as the Ioniq 5 does not have a chassis with adaptive dampers. The contents of the update have not yet been officially confirmed by the manufacturer. “We are considering various things, but nothing has been decided at this stage,” the report quotes a Hyundai representative.

The capabilities of the bidirectional charging system could apparently also be expanded, but possibly only in South Korea for the time being. While Hyundai in Europe usually only talks about a “Vehicle2Load” function, with which electrical devices can be operated with electricity from the drive battery, for South Korea the report talks about “Vehicle2Grid”: In cooperation with the Korea Electric Power Corporation, it should be possible to realise a personal smart grid next year that feeds the remaining electricity in the vehicle into the power grid.

Mini to make its last combustion engine in 2025