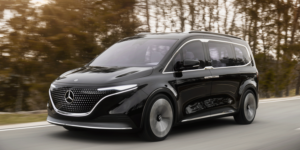 Mercedes-Benz presented the Concept EQT, a near-production preview of the upcoming T-Class and the EQT electric model. The smaller van below the EQV is being developed together with Renault-Nissan-Mitsubishi.

Still, the new Mercedes van clearly towers above its platform brother Renault Kangoo. At the presentation of the design study just passed, the company offered no details about the drive of the EQT. But these are the details we’ve got so far.

It has been known for a long time that Mercedes would present a new “small van”. A successor to the Citan, including an electric version, was already confirmed in summer 2019. Around a year later, Daimler announced a the so-called T-Class, a passenger car version derived from the Citan commercial vehicle, which in turn was to receive an electric offshoot: the EQT. Mercedes will produce both models, so also the EQT, in cooperation with Renault-Nissan-Mitsubishi.

Daimler claims to have learned from the moderately successful first generation of the Citan, which was mainly described as an overpriced Renault Kangoo with a star in the radiator grille. The second Citan and the T-Class are given significantly more independence, which is also to be expressed in the design and the “approach to high-class appeal, comfort, functionality, connectivity and safety”, emphasises Daimler. How far the (more expensive) independence goes or how much Kangoo is still in the Mercedes models is currently unclear.

The difference between the Kangoo and the EQT is obvious in one respect: while the new Kangoo Rapid is 4.49 metres long, the Concept EQT is an impressive 4.95 metres with a width of 1.86 metres and a height of 1.83 metres. Daimler has not yet disclosed any further technical data.

The extreme length and the silence on the EQT’s drive naturally leave room for speculation. It is possible, for example, that Mercedes will adopt the drive of the Kangoo Electric, which has also been announced. This will have a 75 kW electric motor and a 44 kWh battery. Or Mercedes will use the electric drive from its recently presented EQA and EQB compact SUVs; 140 kW with front-wheel drive and 66.5 kWh in the battery. Since the Concept EQT comes within five centimetres of the larger EQV, it even seems possible that the latter’s electric drive system could be offered with 150 kW of power and a 90-kWh battery – although the latter would certainly drive up costs.

If Daimler is serious about positioning the EQT as the “of the first premium vehicle in the small van segment for families and private customers keen on leisure activities”, more than a 75-kW motor should be available in a fully loaded five-metre van. Especially since Renault already quotes the range of the 46-centimetre shorter and lighter Kangoo at only 265 kilometres.

The latter may be enough for an eCitan used as a commercial vehicle, but not for the holiday trip of a family of five with an upper income. Mercedes has shown with the eVito that it can offer drive systems adapted to the respective customer group: While the eVito Tourer features the drive with 100 kWh battery from the EQV, the eVito panel van is sold with a slimmed-down, but significantly cheaper drive.

“It will appeal to families and all those private customers, whatever their age, who enjoy leisure activities and need a lot of space and maximum variability without forgoing comfort and style,” says Marcus Breitschwerdt, Head of Mercedes-Benz Vans. “And as the Concept EQT shows: We are consistently implementing our claim to leadership in electromobility and will also be offering a fully electric model in this segment in the future.”

Let’s move on to what is known: the Concept EQT adopts some of the design elements of the other EQ models, such as the ‘Black Panel’ front, which merges seamlessly into the LED headlights. One difference to the previous EQ models: These have the tailgate instead of the conventional fuel filler neck. Since this would clash with the van’s sliding doors, the charging socket on the Concept EQT is hidden behind the Mercedes star at the front.

The concept vehicle also has strongly pronounced wheel arches and 21-inch rims. It remains unclear whether this will get into series production. At the rear, there is the EQ-typical continuous light strip. The actual rear lights are integrated into the side of the body, not into the tailgate. This makes the concept look more ‘harmonious’ than in the EQB, for example, where the EQ light strip had to be integrated into the existing rear design of the combustion engine GLB.

In the interior of the Concept EQT, there is little to remind us that the Citan is to use the same platform as a commercial vehicle in parallel. The cockpit has a high-quality appearance and is kept in the current Mercedes design. However, the display of the MBUX system is somewhat smaller and analogue instruments are installed behind the steering wheel instead of a large instrument display. Details such as the controls for the air conditioning, for example, appear somewhat simpler in the published pictures than is the case with the EQA or EQB. It is also noticeable that Mercedes does not use the rose gold accents of the other EQ models (for example, on the air vents). The air vents are black – but the trim panels are anodised blue.

One of the important features of a van is, of course, practicality. Thanks to the wide-opening sliding doors, the two fully-fledged individual seats in the third row of seats should also be “easy to reach”. Up to three child seats can be fitted side by side in the second row. The seats in the third row can either be folded down or removed completely – for example, for prams, dog carriers and other leisure equipment. However, Mercedes only refers to a “particularly spacious load compartment” in the press release; the volume is not precisely quantified.

A small eye-catcher in the study: an electric longboard is hidden under the double floor of the load compartment – although “hidden” is not the appropriate term here, highlight the longboard, which is made of aluminium the lid of the storage compartment is made of Plexiglas.

“The Concept EQT gives an outlook on how space and maximum variability can also be combined with stylish comfort in the small van segment,” says Breitschwerdt. “Our future T-Class is a true multi-talent, and with it, we will attract new customer groups and grow sustainably.”

However, the ‘Electric First’ principle cited by Mercedes in the run-up to the presentation of the Concept EQT only applies here to the presentation, not to the market launch: while the Citan, presumably positioned closer to the Kangoo, including its electric version, is to be presented this year, the T-Class (with internal combustion engines) will not be launched until 2022. There is no concrete statement yet for the production EQT: “The fully electric version for private customers will follow later.”