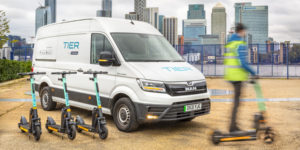 MAN Truck & Bus has signed a framework agreement with micro-mobility provider Tier Mobility for the delivery of up to 130 MAN eTGE battery-electric vans. The first vehicles are already in use in Tier’s logistics fleet in the UK and Germany.

The framework agreement between the commercial vehicle manufacturer and the sharing provider initially applies to 13 countries in Europe where Tier is active. The MAN eTGE is known to be a 3.5-tonne truck with 100 kW output that can achieve a WLTP range of 115 kilometres thanks to a 35.8 kWh battery on board. Tier wants to use the E-Delivery TruckF for logistics around battery replacement for its e-scooters. Specifically, it will be the task of the MAN vehicles to exchange the batteries, which are always freshly charged in the Tier depot, at the e-scooters’ locations in the cities. In addition, the e-vehicles will transport the scooters for maintenance and repair.

The contract now concluded applies to 13 European countries, including Germany, France, Great Britain, Poland, Austria, Norway, Sweden and the Netherlands. An extension to other countries is possible, MAN says in a press release. And: The first vehicles are already in use. In Germany, Düsseldorf, Halle an der Saale, Ingolstadt, Mainz, Wiesbaden, Münster, Reutlingen and Osnabrück have already received copies of the E-transporter.

The background to the order is a voluntary commitment to more sustainability in all areas signed by Tier 2020 together with the suppliers Dott and Voi. At the time, the three companies conjured up ten ecological and social commitments, including the purchase of new e-scooters exclusively with replaceable batteries and the conversion of the fleet of service vehicles used to collect the electric kick scooters for charging and maintenance.

“The MAN eTGE electric transporters represent an important brick in the conversion of our service fleet to electric vehicles. Thanks to the high payload and range of the e-transporter, our employees can transport everything they need for the daily operation of our multimodal fleet and also get through city traffic quickly and efficiently,” expresses Maximilian Djacic, Project Manager Operations Vehicles at Tier.

The MAN eTGE has already been on the market since 2018 – previously as a panel van and for passenger transport as an estate. Since this summer, the Traton subsidiary has been offering additional bodies for the 3.5-tonne truck – namely a box version, a fixed flatbed and a three-way tipper. The drive remains unaffected by the bodies.

For animals, the MAN transporter comes in the TGE 3.140 E version, i.e. as a classic panel van with 10.7 cubic metres of loading space and a payload of just under one tonne. The model is fast-chargeable and, according to the manufacturer, can be charged from 0 to 80 per cent within 45 minutes with up to 40 kW direct current. Standard safety and comfort features include an emergency brake assistant, a reversing camera and a flank protection assistant.