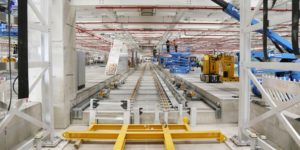 The conversion of the Emden site into Lower Saxony’s first plant for electric cars is on the home straight, according to VW. The first pre-series vehicles of the ID.4 are already being produced in the body shop, the paint shop and soon in assembly. Volume production is scheduled to start in spring 2022.

As is known, the final decision to build MEB vehicles in Emden from 2022 onwards was taken in summer 2019. The conversion work started in July 2020 – parallel to the production of the Passat. In May, VW announced that the conversion work was still on schedule.

According to Christian Vollmer, Member of the Board of Management for Production and Logistics at the Volkswagen brand, the start of the pre-series – and the imminent start of series production – are intended to support the rapid ramp-up of electric mobility – as anchored in the “Accelerate” strategy. “To this end, we are gradually retooling Volkswagen’s global production network – in China, the USA and Germany,” says Vollmer. “In Emden, we are demonstrating Volkswagen’s expertise in optimally aligning existing plants to the new requirements by combining existing facilities and greenfield structures.”

“Essential” to this is significantly increased productivity, Vollmer continues. Plant productivity has been the subject of much discussion at Volkswagen in recent weeks, most recently at the works council meeting in Wolfsburg. VW CEO Herbert Diess, who had recently criticised the main plant in particular, had stated at the works meeting that VW needed around 30 hours to produce an MEB car in Zwickau – while Tesla builds a car in ten hours. How long the production of an ID.4 in Emden will take is not clear from the current announcement.

The ID.4 is to be built in Emden first, followed by two more MEB models from 2023 – a Passat-sized saloon and the accompanying estate. According to VW, a total of six additional production halls and logistics buildings will have been built on the 4,300,000 square metre factory site by then.

In addition to the digitalisation of production (specifically, the ‘Spot Welding Analytics’ tool in the body shop), a new logistics concept within the plant will also contribute to efficiency. According to this, logistics will be directly linked to assembly in the future, and high and small parts warehouses will be fully automated.

In addition, VW states that all of the approximately 8,000 employees at the site will be trained for electromobility. A total of around 400 employees were at the first MEB plant in Zwickau to learn from the experience gained there during the production start-up. In the summer it was still said that 200 employees from the Emden plant would transfer to Zwickau by the end of the year.