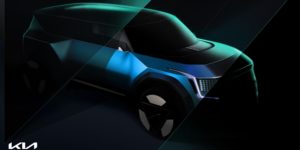 After Hyundai, Kia has now also announced a fully electric large SUV model. A preview in the form of a study will be presented on 17 November at AutoMobility LA with the Kia Concept EV9, for which Kia has published the first renderings in advance.

They show a surprisingly angular design. The electric SUV will be based on the group’s E-GMP platform and its dimensions (and also its angular design) are likely to be similar to those of the Kia Talluride SUV sold in the USA.

Kia itself speaks of an exterior that is supposed to hint at a “contemporary open-air design” – i.e. it is apparently supposed to be practical above all. The cabin is designed to offer passengers a bright, flexible and adaptable interior.

Kia is not yet disclosing technical data. In view of the known E-GMP models and earlier announcements by Hyundai-Kia about the platform, German publication Auto, Motor und Sport repeats the known key data of the E-GMP: The platform can map drives with a maximum output of 600 hp or 440 kW, sporty models should be able to accelerate to 100 km/h in less than 3.5 seconds. With a range of around 500 kilometres according to WLTP, the battery can be charged from ten to 80 per cent in 18 minutes.

It is not yet known what of these maximum data apply to the large SUV – but 800 volts are considered a given. The maximum output of 440 kW also seems possible in view of the 430 kW in the Kia EV6 GT. However, there might also be weaker variants with more range. It remains to be seen whether Kia will offer the EV9 only as a four-wheel-drive or also with pure rear-wheel drive.

As reported, Hyundai will also present a preview of its large electric SUV Ioniq 7 with the Seven concept car at AutoMobility LA on 17 November. Here, too, the South Korean company seem to be going for a very modern and angular design, but with different elements than the Ioniq 5. As with the Concept EV9, no technical data are known for the Hyundai Seven.

In a recent press release, Kia also confirms the target set by its parent company Hyundai Motor Company at the beginning of September to stop selling combustion vehicles in Europe from 2035 and in the other most important world markets from 2040.