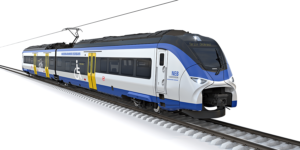 The Berlin-Brandenburg region will get its first zero-emission regional trains from December 2024. Niederbarnimer Eisenbahn (NEB) has just ordered 31 two-car battery trains of the type Mireo Plus B from Siemens Mobility. In May this year, NEB already announced plans for six hydrogen trains and associated infrastructure along the RB27 regional railway line – also to be put in operation from December 2024

The 31 battery-electric Siemens trains will be the first of their kind in the VBB network area in Berlin and Brandenburg from December 2024 and will run on all lines of the East Brandenburg network in future. Up to now, only diesel-powered trains have been in operation.

In a Europe-wide tender for the award of the East Brandenburg network, the states of Berlin and Brandenburg specified that they wanted zero-emission alternative drives and the reduction of environmental pollution. Siemens won the tender for the battery-electric trains. The German engineering group will now provide Mireo Plus B railcars that draw their energy from overhead lines. On non-electrified sections of the track, the batteries on board then provide the energy supply. In addition, recovered braking energy is used for propulsion. According to Siemens, the two-car railcars have a battery range of around 90 kilometres. They are equipped with three doors on each side and with a mechanism for a barrier-free passenger entrance.

Siemens says the double-carriage trains have 128 seating spaces. The trains also have a comparably modest twelve parking spaces for bicycles, wheelchairs and prams, considering the region is a popular cycling destination. Just like conventional rail cars, two or more railcars can also be coupled behind each other in multiple traction units to provide additional seats. The carriages come equipped for the convenience of passengers with 60 power sockets, USB charging sockets, free WLAN, a dynamic passenger information system and a designated family area.

In future, the Mireo Plus B will be charged on the East Brandenburg network not only at the overhead line but also at charging stations to be set up in Wriezen (RB60), Templin (RB12, RB63) and Beeskow (RB36).

In the East Brandenburg region, along with the change to zero-emission trains using locally produced green energy, an improved and more frequent service is to be created from the 2024 timetable change.

According to Susanne Henckel, Managing Director of the Verkehrsverbund Berlin-Brandenburg (VBB), the East Brandenburg network and its focus on alternative drives set new standards. “The range of services for passengers will be significantly increased by new vehicles and increased frequency. Because there is no alternative: the environmentally friendly railways must be further strengthened. What pleases me most is that electric vehicles with battery storage will be used on many lines in the future. A change in transport and climate protection in step: a good day for public transport in Berlin and Brandenburg.”

In May this year, the Niederbarnimer Eisenbahn (NEB) also already announced plans to operate six hydrogen trains on the RB27 regional railway line to the northeast of Berlin from December 2024. Here, the production and use of green hydrogen is being promoted in a joint project in the Brandenburg districts of Barnim and Oberhavel.

The joint project, which is estimated to cost 100 million euros and is entitled “Use of hydrogen fuel cell drives in local transport in the Barnim district”, is being funded with a total of around 25 million euros as part of the National Hydrogen and Fuel Cell Technology Innovation Programme. Niederbarnimer Eisenbahn (NEB) will receive around 9 million euros from this funding pot for the procurement of the six H2 trains.

The other partners in the network include the energy producer Enertrag and the Kreiswerke Barnim. Enertrag will produce 100 per cent of the hydrogen needed for refuelling from regeneratively generated electricity and is building its own hydrogen plant. Kreiswerke Barnim is responsible for the construction of a hydrogen filling station. The German Federal Ministry for Transport and Infrastructure (BMVI) is supporting the construction projects with around 13 million euros (Enertrag) and 2.5 million euros (Kreiswerke Barnim).

“We want to supply our region with hydrogen from wind power. It is the cheapest renewable fuel,” CEO Jörg Müller says of Enertrag’s ambitions. “Our hybrid power plant has been demonstrating for ten years that electrolysis makes renewable energy easily storable. (…) Travelling through Brandenburg by train is certainly twice as much fun when the fuel comes from local windmills.”

Incidentally, with the six new H2 trains starting in 2024, the association partners want to reactivate the historic main line of the Heidekrautbahn, which connects the surrounding area with the metropolis of Berlin. Detlef Bröcker, CEO of Niederbarnimer Eisenbahn, says: “The hydrogen trains increase the attractiveness of local rail passenger transport for commuter traffic and tourism and support the expansion of environmentally friendly, green mobility in the region. The parallel reactivation of the mainline of the Heidekrautbahn creates additional, outstanding synergies that can be used for climate protection and to promote sustainable local rail passenger transport for the region north of Berlin.”

Currently, the trio is in the process of detailed planning for the vehicles, the hydrogen generation and infrastructure plants, as well as initiating the necessary approval procedures. The declared goal is to have the first H2 trains in operation by the timetable change on 15 December 2024. The BTU Cottbus-Senftenberg and the German Aerospace Centre are on board as research partners.