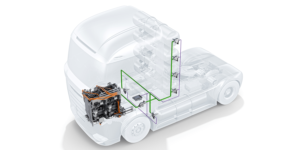 Bosch is expanding its product portfolio for mobile hydrogen applications to include components for H2 tank systems such as tank valves or pressure regulators. To this end, the German technology group is cooperating with the northern Italian specialist OMB Saleri.

Within the development partnership with the Italians, Bosch wants to make the H2 tank components “ready for large-scale production” and then offer them at competitive prices thanks to large quantities. Specifically, the collaboration includes a licensing and development agreement for several products for hydrogen storage solutions in the 350 and 700 bar pressure levels. According to Bosch, the German-Italian teams are currently in the process of further developing the existing products and optimising them for large-scale production.

OMB Saleri, based in Brescia in northern Italy, specialises in components for hydrogen storage solutions. Through the cooperation, the company benefits from development expertise, a modern H2 test infrastructure and test stations, as well as components that have already proven themselves in initial applications, Bosch says. In return, the German company will contribute its experience in product industrialisation as well as a global development and manufacturing network for large quantities.

“In the drive to achieve climate neutrality, hydrogen will be an important building block in the future powertrain mix,” Dr Uwe Gackstatter, chairman of the Bosch Powertrain Solutions division, is convinced. According to his forecast, the demand for hydrogen-based drives will rise sharply in the coming years, especially for commercial vehicles. It is expected that by 2030, around one in eight newly registered commercial vehicles worldwide will have a fuel cell on board.

Bosch therefore says it is making considerable advance investments: From 2021 to 2024, the company says it will invest a good 600 million euros in mobile applications and 400 million euros in applications for stationary power and heat generation. The portfolio for vehicles ranges from individual sensors to core components such as the electric air compressor and the stack to the complete fuel cell module.