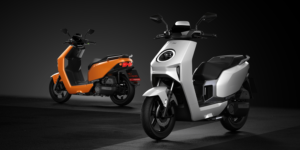 Niu has presented a number of new models at the EICMA in Milan, including an electric scooter called MQi GT Evo that goes over 100 km/h and an urban electric motorcycle called RQi. The Chinese manufacturer also debuted a range of micro-mobility products in Milan.

Let’s take a closer look at the novelties: The MQi GT Evo is the latest representative of Niu’s M series. It has been completely redesigned visually, has a top speed of a good 100 km/h and sprints from 0 to 50 km/h in 3.3 seconds. This top performance is achieved by a 5 kW hub motor in combination with two removable 26 Ah batteries (72 volts). Niu gives a range of up to 100 kilometres. According to the manufacturer, the batteries can be charged in less than four hours. Other features of the MQi GT Evo include a choice of four colours, keyless ignition and an electric anti-theft steering wheel lock. It is priced at €4,999 – “including three years of connectivity and app services”, according to Niu.

The MQi GT Evo embodies a number of new achievements for Niu. It is the Chinese company’s fastest electric scooter to date, with the most powerful hub motor to date and, for the first time, higher battery voltage (72 volts instead of 48 volts) than in previous models.

With the RQi, Niu also has a new electric motorbike for the city in Milan, which it already gave a preview of at CES 2020. The drive consists of a 5 kW chain motor and two removable 36 Ah batteries (72 volts). The only performance figure Niu mentions is a top speed of a good 110 km/h. With a newly developed “Launch Mode”, riders are supposed to be able to get a boost at short notice. The Chinese again put the charging time of the batteries at just under four hours. Another feature of the RQi is the newly designed front and rear cameras. The price is 6,999 euros.

Next up is the NQi GTS, which is being upgraded for the 2022 model year. The model comes with a newly developed “V-engine” that is supposed to accelerate the scooter to over 80 km/h. The range is given as 70 kilometres. Niu quotes a range of 70 kilometres and a price of 3,999 euros.

At the same time, Niu is venturing into the scooter market. At the beginning of the year, the manufacturer presented a first example called KQi3, which is to be found in retail stores in Europe and the United States in spring. The KQi2, currently on display at the EICMA, is the youngest member of the electric scooter family: it reaches up to 25 km/h and is to cost 499 euros.

Niu is also entering a new market with the BQi e-bike. The model has a 250 W Bafang motor and a single-gear transmission. The electric pedal assistance is supposed to work up to a range of 100 kilometres. The manufacturer states the top speed as 25 km/h, the price as “under 1,500 euros”.

Finally, Niu is also putting the spotlight on a study of a hybrid motorbike called YQi at the Milan show, which combines a liquid-cooled 150-cc petrol engine with a centrally placed 2400-W electric motor. This duo is said to achieve “top speeds and acceleration times otherwise only found on motorbikes over 250 cc,” according to an accompanying statement. The production YQi is expected to be launched in the first half of 2023.

“We believe we can convince die-hard fans of petrol motorbikes that the future lies in electric mobility. The YQi is a motorbike that can help bridge the gap,” expresses Niu co-founder Token Hu.

As with all other Niu scooters, the new vehicles will be equipped with a prepaid SIM card from Vodafone that allows 24/7 connection to the Niu app. This app provides riders with real-time information such as GPS, anti-theft and remote tracking, as well as a help centre. At the same time, the scooters are regularly updated with the latest software via over-the-air updates.