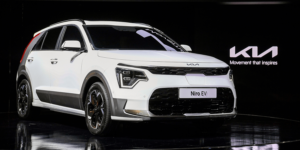 At the Seoul Mobility Show, Kia presented the new generation of the Niro, which will go on sale next year as a hybrid, plug-in hybrid and battery-electric model. The focus of the presentation was on the completely new design. Kia has not yet revealed whether there will be any changes to the powertrains.

The first generation of the Niro (since 2016) was offered exclusively with alternative powertrains – the compact crossover used the powertrain from the Hyundai Ioniq sedan for the hybrid and plug-in hybrid. However, the BEV version e-Niro, which has been offered since 2018, did not take over the drive from the Ioniq Electric, but both options from the Kona Electric. In other words: 100 kW power with a 39.2 kWh battery or 150 kW with a 64 kWh battery.

However, since it is not yet known whether Hyundai will also bring a new generation of the Ioniq sedan with the different drive types, there is therefore a question mark over the drives in the now presented Kia Niro: Will the previous powertrains be taken over unchanged or will there be a further development?

Kia has only confirmed that the plug-in hybrid will be equipped with a so-called “Greenzone Drive Mode” technology. This is a geofencing system that automatically switches the drive to electric driving mode in certain areas. This is supposed to be the case in residential areas or near schools or hospitals – the system is also supposed to recognise “favourite places of the driver” such as his home or office and set them as a “greenzone”. In principle, this function is also announced for the hybrid, but here the effect is manageable with the low e-range.

It is also clear that the design has evolved. The second generation presented in Seoul has shed the somewhat conservative look and follows the current and more expressive Kia design philosophy “Opposites United”. Due headlights with LED daytime running lights are completely new and striking, and the rear with the now upright taillights is no longer reminiscent of the predecessor. On the sides of the body there are elements painted in a contrasting colour.

In the interior, the new Niro picks up numerous elements from the EV6 E-GMP model. For example, the pictures show the steering wheel with two spokes or displays including the bar for the climate and infotainment controls familiar from the EV6. The centre console, including the gear selector, follows the same design line, but is designed as a continuous centre console in the Niro.

As a “clear commitment by Kia to sustainability and as an indication of future model development”, the South Korean company cites a few more innovations: The headliner is made of recycled wallpaper, the seats are made of bio-PU with Tencel from eucalyptus leaves and the door panels are painted BTX-free. The latter is a water-based paint that is free of benzene, toluene and xylene isomers.

After Kia presented the new generation of the Niro in November 2021, which will go on sale as a hybrid, plug-in hybrid and battery-electric model, some new details now follow. Kia will start selling the new Niro Hybrid in South Korea this month. In Germany, the new Niro Hybrid will be on sale from the middle of the year.

The Niro Hybrid’s powertrain combines a 77.2 kW (105 hp) petrol engine and a 32 kW electric motor. The system output is 103.6 kW (141 hp). Thus, at least in terms of the HEV’s performance data, there are no changes to the first generation. At least with the six-speed dual-clutch transmission, Kia speaks of a new generation that is supposed to be lighter and more efficient. However, the manufacturer does not yet provide fuel consumption data or information on the battery installed in the hybrid model.

The two plug-in models – PHEV and BEV – will be presented in more detail at a later date.