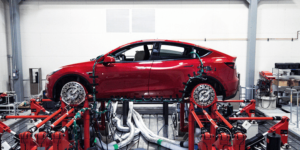 According to a media report, Tesla can apparently expect final approval for its factory in Grünheide in the coming days and consequently start series production in December.

This was reported by the German publication Automobilwoche, but without naming any sources. A few days ago, three Model Ys had already been spotted on the factory’s own test track in Grünheide, however, it was still unclear whether these were vehicles built in Grünheide or examples built in Fremont or Shanghai. Since the vehicles do not have to go on the test track for the latter, it was already considered likely that the vehicles were assembled in Grünheide.

As the report now claims to have learned, five units of the Model Y have already been completed in Grünheide – according to the report, however, not on the production line. This means that they are likely to be hand-built vehicles from the pilot assembly line.

It is not known how many units will be built on the production line in December. Regarding the production ramp-up in 2022, the article says that initially 1,000 Model Ys per week are planned from the beginning of January. That would amount to around 4,000 vehicles for January. For the first half of the year, Automobilwoche assumes an estimated 30,000 Model Ys, so the rate of increase is estimated to be rather moderate – at 1,000 vehicles per week, there would already be 24,000 units in the first half of the year. 1,000 vehicles per week at the start does not seem entirely unrealistic: Tesla is said to have already achieved this figure in December 2019 for the production start-up of the Giga Shanghai.

A production start in December seems possible, as the Brandenburg Minister of Economic Affairs, Jörg Steinbach, has recently emphasised that the first Tesla will probably still roll off the production line in Grünheide in 2021. Originally, the production start was planned for July, but it might not be kept due to some delays and the still pending approval. Last week, the online discussion on objections to the plant, which was scheduled for the second time, was closed. Already then, approval was expected in December.

According to a report by local German publication RBB, the start of production at the Tesla plant in Grünheide, which had been likely until now, is on the brink of collapse. This is only because a decision on disputed water extraction in the vicinity of the factory has been postponed. The administrative court in Frankfurt (Oder) confirmed to RBB on 6 December that the hearing scheduled for this week would be postponed. It is not yet known when it will be held.

The background to this is that several environmental associations have filed a lawsuit with regard to the 2020 increase in pumping volumes for the Eggersdorf waterworks. Part of the water is intended for the Tesla plant in neighbouring Grünheide. According to the German news network RBB, the decision on the case has now been postponed for the third time.