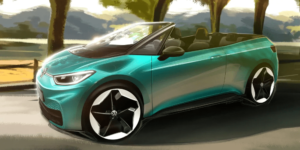 The VW plant in Osnabrück has a chance of producing an electric convertible, as Group CEO Herbert Diess has now announced. According to Diess, not only the Volkswagen brand but also Audi is considering the possibility.

The plant, which currently mainly produces the open-top version of the T-Roc, is very competent as a “niche convertible location”, said the CEO in an internal conversation, about which the workforce could submit questions. “The next option, of course, has to be an electric convertible. There are considerations at Volkswagen, there are considerations at Audi,” the group boss is quoted as saying, without being more specific.

Diess also seemed for a long time to be the promoter behind the concept ID. Buggy study. However, the MEB-based “fun mobile” was not to be built at VW, but in cooperation with e.Go Mobile. However, such a model never made it onto the road; the project was discontinued in 2020.

This spring, Volkswagen itself had publicly considered a convertible based on the ID.3 and published a sketch of it. “An ID.3 Cabrio would be really appealing – electric and enjoying nature with the roof down,” the VW newsroom said at the time. With the “thought experiment” VW wanted to get customer feedback – which may have been positive enough to bring the ID.3 Cabrio as a niche model similar to the T-Roc Cabrio.

The plant in Osnabrück has only belonged to VW since 2009, when it was taken over from the insolvency estate of the supplier Wilhelm Karmann GmbH. The connection between Karmann and VW was historically close; the convertible versions of the Beetle and Golf, for example, were built there to order. Later, the contract manufacturer, which specialised in niche models and small series, ran into economic difficulties.

Volkswagen Osnabrück GmbH is still run as an independent subsidiary of Volkswagen AG. Within the group, the subsidiary is the centre of competence for convertible and small-series production. As such, the site is currently considered to be underutilised. The upcoming planning round – the supervisory board will meet on 9 December – could bring clarity about an e-convertible.

New Astra to release as an estate & includes PHEV variant