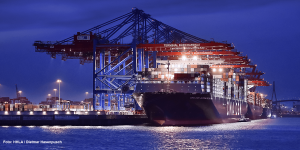 The European Parliament has voted for the inclusion of CO2 emissions from maritime shipping in the EU Emissions Trading Scheme to decarbonise naval transport. Now the EU Parliament is to begin negotiations with the EU states on concrete legislation.

Maritime transport is so far the only sector in which the EU has no specific obligations to reduce CO2 emissions. The vote to revise the EU system for monitoring, reporting and verifying CO2 emissions from maritime transport (the ‘EU-MRV Regulation’) had a clear outcome: 520 parliamentarians voted in favour, 94 against and 77 abstained.

The Commission proposed that reporting obligations by the EU and the International Maritime Organisation (IMO) should be aligned. While MEBs agree, they noted that the IMO has made insufficient progress in reaching a global agreement on greenhouse gas (GHG) emissions. The UN organisation at its London meeting in 2018 had agreed to reduce emissions by at least 50 per cent by 2050 from 2008 levels. This had been the first time such an agreement had been reached only there was no clear plan of action. Parliamentarians have therefore asked the Commission to examine the environmental integrity of the measures decided by the IMO as well as the targets set under the Paris Agreement. What is urgently needed, they said, is a global ambitious agreement on GHG emissions from shipping.

Although the Parliament demands that ships of 5000 gross registered tons or more should be included in the EU Emissions Trading Scheme (ETS), many MEPs still feel that this is not enough. The demand here is that shipping companies reduce their annual average CO2 emissions per transport service for all their ships by at least 40 per cent by 2030.

“Monitoring and reporting on CO2 emissions is important, but statistics alone will not save a single gram of greenhouse gas,” says Jutta Paulus, who sits for the Greens in the European Parliament. “That is why we are going further than the Commission proposal and are calling for tougher measures to reduce emissions from shipping”.

A global and ambitious agreement on greenhouse gas emissions from shipping is urgently needed, they said. They envisage an ‘Ocean Fund’ financed by auctioning emission allowances. This would be used between 2022 and 2030 not only to promote programmes that reduce the consumption of ships but also to promote infrastructure for alternative fuels and greener ports.

The Parliament is now ready to start negotiations with the member states on the final form of the legislation.

A take from our archives

Where transformation is apparent is in the Baltic and Nordic waterways. Several companies are already using battery-powered ferries which have found solutions led primarily by Norway where the government set the world’s first zero-emission zone on water back in 2018. For smaller ships, there are already market-ready solutions for both purely battery-electric as well as hydrogen propulsion systems, as well as retrofit solutions. Even inland shipping has made progress recently with initiatives such as ZES introducing battery-swapping systems for container ships. For the use of smaller boats, many solutions are readily available, such as the solutions offered by Torqueedo, for example. This means that the only thing missing for the decarbonisation for vessels up to the size of short-distance ferries or inland waterway cargo is guiding legislation.

The greatest challenge is posed by the international long-haul shipping sector that faces very concrete hurdles.

Shipping, in particular, has proven to be a significant source of GHG emissions a result of the traditionally low grade “bunker fuel” used in ships engines. However, these are currently no zero-emission long-haul shipping solutions on the market, since large hauls over long distances without recharging opportunities pose many challenges. Not only that, but ships last around 50 years if they are well maintained – which means that new shipping vessels bought now will be around for another 50 years, posing a genuine question of how shipping companies are to begin the decarbonisation of their fleets. Here too, though, there are already options. Hybrid battery solutions can work either in combination with a diesel engine, or they can combine with fuel cell propulsion systems for zero-emission alternatives as the technology becomes available. Only yesterday EAS presented a flexible hybrid battery solution that is compatible with either H2 or diesel in hybrid.

In terms of hydrogen fuel cell technology for larger ships, some initiatives are pushing forward on solutions. In April this year, ABB signed an MoU with Hydrogène de France (HDF) to jointly manufacture megawatt fuel cell systems for powering shipping vessels. The two partners want to optimise the production of large systems to be able to build fuel cell power plants in the megawatt range for ships. Just one year ago, Ballard Power Systems Europe announced the construction of a Marine Center of Excellence at its facility in Hobro, Denmark, where fuel cell modules for ships will be developed and produced. ABB is also collaborating with the research organisation SINTEF of Norway to model a complete marine power system in a megawatt-scale propulsion plant. Other companies collaborating on fuel cell ships include PowerCell of Sweden who has teamed up with Siemens.