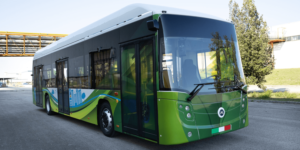 The Italian bus manufacturer Industria Italiana Autobus has presented its first fully electric city bus. The electric 12-metre bus Citymood 12e is powered by a Siemens motor with 160 kW continuous and 230 kW peak power and has a battery with NMC cells.

The battery is offered in two versions with 330 and 495 kWh, according to the manufacturer. While Siemens is named as the supplier of the electric motor, it is not clear from the data sheet from which supplier Industria Italiana Autobus obtains the battery cells. Apart from the capacity of the battery packs and the reference to NMC cell chemistry, only the nominal voltage of 655 volts is given. A range is not mentioned.

The Italians emphasise that the 12.10-metre bus is not a prefabricated vehicle, but can be configured according to the needs of transport companies. In addition to the choice of battery size, mirror cameras are also mentioned. Other possible adaptations are not specified, but are likely to affect the interior in particular. Striking: The portal “Sustainable Bus” states that the camera mirrors are standard – the manufacturer itself, however, mentions them in the section on configuration options.

Regarding the charging system of the batteries, Industria Italiana Autobus states that they can be charged via CCS with a maximum charging power of 130 kW. However, there is apparently no pantograph charging option.

The Citymood 12e is to be built in its own factory in Flumeri, which has been renovated with government funding since 2019. For the production, 200 workers who were previously employed there but had to be laid off in the meantime are to be rehired. The design department has also been rebuilt since the relaunch two years ago.

The battery-electric version now on display could also be followed by a fuel cell version. CEO Antonio Liguori said 2023 could be the year of hydrogen. “We are studying to see what the best solution is. At the same time we are waiting for the infrastructure to be built,” he said.