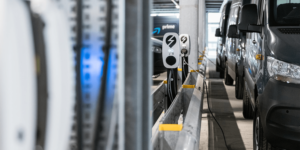 UK charging solutions provider EO Charging has filed a patent for new technology. The company says its new ISO 15118-compliant chargers and software will allow EO to perform smart AC-charging on legacy fleet electric vehicles that are not compliant with the 15118 standard.

EO Charging says the new charger and software will transform the smart charging of electric vehicle fleets. This is because EO says it can now perform smart AC charging on legacy fleet vehicles that are not compliant with the 15118 standard.

Until now, only newer vehicles have been able to utilise the ISO 15118 standard which allows a vehicle to communicate with a charging unit without the need for cards or chips as well as enabling smart charging and verifying a trusted device. Since its introduction in 2014, the ISO 15118 standard has mostly used by DC charge point operators. EO says that it has harnessed learnings from operators already using Plug&Charge capable DC chargers across Europe, and applied it in a fleet scenario where AC chargers are more widely utilised.

The British charging company explains that the new technology works by permitting a two-way exchange of information between EV and AC charging unit. This removes the need for third-party telematics providers and simplifies large-scale fleet electrification. EO’s EV charger automatically authenticates a vehicle’s ID, allowing the built-in software to assess state of charge (“SOC”) and then regulates the charge session based on the vehicle’s operational requirements as well as the depot’s real-time energy profile.

Charlie Jardine, CEO and Founder of EO Charging, says: “Plug&Charge has had a hugely positive impact in the public charging space, creating a seamless and efficient charging experience for drivers.” But explains that “…it was exclusive to DC charging stations and therefore financially prohibitive for many users.” But thanks to this breakthrough, the EO founder says the newly patented charger and software can now bring this technology to fleet operators, “harnessing its benefits for our customers around the world and across multiple charging systems.”

As was illustrated recently in the UK with a sudden increase in electric vehicle use with the petrol transport shortage, as more businesses and governments invest in fleet electrification, more pressure is put on electricity grids to meet charging demands. Now EO says that its patented technology will help ease this pressure using smart grid communication (V2G) to avoid peak grid consumption hours. This has the added benefit for drivers and fleet operators that this makes charging more cost-effective, since energy can be used when it is the cheapest.

Exactly a year ago, we reported on the barriers still hindering the widespread uptake of the ISO 15118 standard Plug& Charge capabilities. We noted that, while more and more charging stations are Plug&Charge-capable, for the technology to be widely used, a large number of Plug&Charge-enabled vehicles is still missing. This new technology should change that.

EO has said that a live trial of the new technology is already scheduled with EO’s “largest fleet customer” in early 2022. With this customer, EO has already installed and manages more than 4,400 chargers in almost 70 depots, across 7 countries in Europe.

The UK-based company is certainly growing fast. Just last month EO Charging announced its expansion into North America and is looking to select the site for its North American office, set to open in early 2022. The new division will deliver EO’s complete fleet charging system throughout the Americas, as well as “additional offerings”, as the company indicated at the time, most probably betting on the waves that these new capabilities will make for fleet owners.