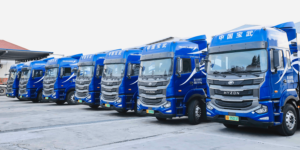 US fuel cell truck manufacturer Hyzon Motors announced the delivery of 29 hydrogen trucks to what the company considers a major steel conglomerate in China, namely Shanghai Hydrogen HongYun Automotive (HongYun). The fuel cell vehicles will haul steel coils in the conglomerate’s fleet in the coming months.

Hyzon said it delivered the fuel cell trucks in November as part of a larger order of 62 hydrogen vehicles. The 49-ton trucks, Hyzon’s heaviest class, utilise a 170-kilowatt fuel cell stack, and Hyzon expects the fleet to save about 140 tons of CO2 emission a year. The range is between 400 to 600 kilometres depending on the fill tank, but the company made no mention of the option HongYun selected.

HongYun is a service provider for logistics that wants to become the “leading supplier of hydrogen-powered fuel cell vehicles”. According to the company, it maintains close contacts with large logistics groups in China and offers, among other things, operating, leasing and maintenance services for customers throughout the country.

The current delivery goes back to an MoU Hyzon and HongYun signed only in September. The MoU specifies an order volume of up to 500 fuel cell trucks, with Hyzon having expected the first order over up to a hundred trucks this year. This appears to have at least partially manifested – in addition to the above 49 FCEV, Hongyun has further orders for 33 more trucks confirmed with Hyzon, bringing the total to 82 so far.

“Hydrogen fuel cell technology has been adopted more quickly in China than in the rest of the world,” said Hyzon CEO Craig Knight. He added that he expected this initial order “to make an immediate environmental impact,” especially since the steel industry was under scrutiny.

Hyzon Motors began operations in March 2020. Headquartered in Rochester, New York, the fledgling company was founded as a subsidiary of Singapore-based fuel cell manufacturer Horizon Fuel Cell Technologies to serve as a full-service provider to accelerate the adoption of hydrogen-powered commercial vehicles.

Shortly after starting operations, Hyzon established a European headquarters in Groningen, the Netherlands, in July 2020. The company is also preparing to launch its first customer trials in the US.

Hyzon’s production and engineering centres for the Chinese market are in Shanghai.

Irizar expands in Portugal with new order from Guimarães