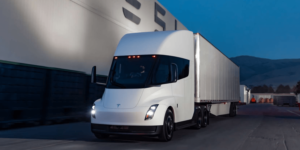 Tesla has started small-scale production of the ‘Semi’ electric truck in a new hall at its Nevada factory, according to an observer. However, series production of the Tesla Semi is not scheduled to start until 2023.

The statement on the start of series production comes from Elon Musk himself, he named the year 2023 at the annual general meeting in October, when the electric truck Semi is to be built at Gigafactory Texas near Austin.

Near Gigafactory 1 in Nevada, a few examples of the Semi were recently spotted leaving a hall. Twitter user ‘Sawyer Merritt’, who has been watching the factory, not only filmed the vehicles but also said he had confirmation from a source that “limited production” had begun in the building.

This pre-production is likely to be not only for internal testing purposes, but also to go to the first customers for testing. The food company PepsiCo had already ordered 100 Tesla Semi in 2017 shortly after it was unveiled. In November, PepsiCo CEO Ramon Laguarta reportedly said he expected the first deliveries before the end of the year.

The construction of the corresponding charging infrastructure also fits the schedule: Tesla recently built the first megachargers near Gigafactory 1, and two of the units are reportedly already functional. PepsiCo is also reportedly currently building a megacharger in California after receiving the corresponding permit at the beginning of December.

Such practical tests are not unusual; Daimler, for example, had also delivered numerous pre-series models of its eActros to customers so that they could be tested in their logistics processes. In the case of the eActros, however, these test vehicles had a slightly different technical status than the series model. It is not known whether this is also the case with Tesla.

With a delivery of the first examples before the end of the year, Tesla would meet the time frame it had set itself: When presenting its financial figures for 2020 in January – well before the statement from the annual general meeting – Tesla had still announced that it would deliver the first Semi “towards the end of the year”. In the conference call following the financial figures, Musk had stated that the production and availability of the new 4680 cells was the bottleneck.

Tesla is manufacturing the 4680 cells at its Tera pilot plant in Fremont. This year, a production capacity of 10 GWh is to be reached there. By the end of 2022, production capacities of 100 GWh are to be created in Grünheide and Texas. In addition, other cell suppliers are working on 4680 cells that Tesla could buy in.