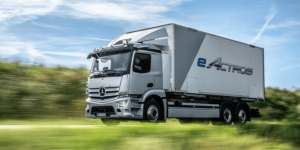 Following the start of production of the eActros in October, Mercedes-Benz Trucks has now booked its first major order. The Swedish technology company Einride has ordered 120 eActros to support their customers in European markets.

Einride is best known to us as the developer of the autonomous electric truck T-Pod, which no longer even has a cab in its futuristic design. But the Swedish startup, founded in 2016, has built other footholds with digital fleet services and third-party vehicle procurement, and now describes itself as a “freight technology company offering digital, electric and autonomous transportation.”

Mercedes-Benz Trucks has agreed to deliver the 120 eActros in mid-2022. The vehicles are the eActros 300 and eActros 400 models with three and four battery packs, respectively. The German automaker says that the cooperation with the Swedish startup is to be expanded beyond the current supply agreement to include the “development of joint solutions for the new era of electrified road freight transport.”

“As we continue to build out our global fleet of connected electric vehicles,” explains Ellen Kugelberg, chief operating officer of Einride, “it is imperative that we partner with best in class technical performance, to pair with our software solutions, and we confidently found that with the Mercedes-Benz eActros. Through joint product development we’ll continue to provide an effective and efficient path to electrification for the industry together.”

According to Karin Rådström, member of the Board of Management of Daimler Truck Holding AG, responsible for the Europe and Latin America regions and the Mercedes-Benz Truck brand, the major order from Sweden “demonstrates that the eActros is the right vehicle and it strengthens us on our way to the complete decarbonisation of the transport sector.”

Series production vehicles of the eActros have been rolling off the production line at the Wörth am Rhein plant in Germany since the beginning of October 2021. In June this year, Daimler Truck presented the production version of the electric truck and its technical specifications. The maximum battery capacity is 420 kWh (in the eActros 400), which should provide a range of up to 400 kilometres. In the future, the electrification of other truck models will also be carried out in Wörth. Series production of the eEconic, developed for municipal use, is scheduled for the second half of 2022. Two years later, the battery-electric eActros LongHaul for long-distance transport will also be ready for series production.