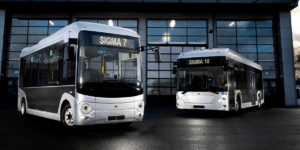 The first models with lengths of seven and ten metres can be ordered immediately and are scheduled for delivery from early summer 2022. Mellor plans to gradually introduce the eight, nine, eleven and twelve-metre models during 2022. The Rochdale-based company is a subsidiary of Woodall Nicholson and has made a name for itself over the decades primarily as a conversion and body specialist. So far, the British company’s product range has mainly included converted vans based on the Iveco Daily, the Fiat Ducato, the Mercedes Sprinter and the Volkswagen Transporter – marketed under the names Maxima, Orion, Strata and Tucana.

Now a “significant repositioning of the commercial activities” has taken place, Mellor announces in an accompanying press release. This involves the launch of the zero-emission Sigma range, with which the company aims to secure “a firm place in the midi bus sector” in the UK and overseas markets. The six low-floor models in staggered lengths and heights (from 7 to 12 metres; from 8 to 19 tonnes GVW) have 30 to 80 seats, specifications for urban and intercity services, and different configurations for width and passenger doors, according to the manufacturer. The choice thus grows to more than 20 variants.

Mellor does not give technical details in its press release. It merely states that thanks to lightweight construction, smaller batteries can be used and that suppliers include CATL, Webasto, ZF, Dana and Ventura. The company also mentions a battery guarantee of eight years.

However, the portal “Bus and Coach Buyer” mentions some specifications. For example, the first two available representatives of the new E-bus family are said to be the 6.99-metre-long Sigma 7 model and the 10.25-metre-long Sigma 10, both of which are to go on sale in both left- and right-hand drive versions.

According to the portal, the Sigma 10 was developed by Promech Technologies – also a subsidiary of Woodall Nicholson – and is said to have a power output of 210 kW, a range of 160 miles (about 257 kilometres) and a gross vehicle weight of 16 tonnes. The article does not mention the battery capacity, but the battery manufacturer – CATL – and the charging time: it is said to be 2:15 hours.

The philosophy is to match each specification exactly to the requirements needed for a daily range of about 160 miles. For example, the Sigma 10 has an output of 210 kW, is mounted on 19.5-inch wheels and has a gross vehicle weight rating of 16 tonnes. Lower gross weights mean that less battery power is required for propulsion, which in turn means that less energy is needed for charging and charging times can be shorter.

And further, the Mellor Sigma 7 is said to stand on 17.5-inch wheels, have a gross vehicle weight rating of 8 tonnes and a charge time of 1:30 hours. The portal report does not say whether the drive is identical. It only says that the main features of the new bus family include a stainless steel frame, composite floor and carbon fibre bodies, and that part of the build will take place in China before full assembly is carried out at a new Sigma plant in Scarborough, which is due to open in 2022.

“After significant investment, and benefitting from our vastly experienced engineers and our partner component manufacturers, we’re bringing our new Sigma range to market, and the beginning of a new chapter in the history of Mellor in the UK,” commented Mark Clissett, Managing Director of Mellor’s Bus Division, on the launch of the new bus family. “We truly believe Sigma represents a redefinition of the zero-emissions bus offering,” said Clissett, “with sophisticated model options that provide the lowest possible total cost of ownership for a wide range of urban and rural transport operations.

Meanwhile, Mellor’s website already mentions two electric buses in its portfolio, but these are conversions: the 7.5-metre Orion E-Range based on the Fiat Ducato and a zero-emission Maxima variant based on the Iveco Daily.

Fiat introduces the New Scudo with an electric drive