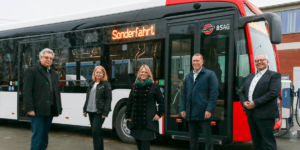 Daimler Truck has now delivered the first of 20 electric buses with solid-state batteries as ordered by Bremen’s public transport operator BSAG. Another four eCitaro will arrive in Bremen in the coming weeks, while both sides have signed a contract for the delivery of 15 identical buses in 2022.

Already when BSAG placed the order last year, it knew it would receive the latest Mercedes eCitaro buses with solid-state batteries on board. The lithium-polymer battery with solid electrolyte holds 441 kWh and comes from Bolloré subsidiary Blue Solutions in France. Mercedes-Benz first announced the innovative battery option for the eCitaro in 2018.

What is more, BSAG now confirmed it has opted for Mercedes to deliver another 15 identical eCitaro buses. When placing the order in 2020, it remained open who would supply the remaining buses; fuel cells were also discussed as an option.

Now BSAG has thrown in 24 Citaro G hybrids, bringing the total bus order up to 39.

The eCitaro buses delivered to BSAG have three doors and a low floor. Mercedes also emphasized the wheelchair lift and two areas for wheelchairs and strollers as well as side-folding seats.

Bremer Straßenbahn AG says it runs nearly 350 trams and buses which transport almost 300,000 passengers a day. The bus network comprises more than 40 lines with a total length of around 500 kilometres. BSAG wants to achieve 50 per cent climate-neutral operations by 2025. The electricity used is already coming from hydroelectric and wind power.