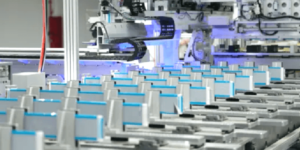 BYD is massively expanding its battery production capacities in China. An investment agreement was signed with the municipal government of Fuzhou in China’s Jiangxi province to build a new battery production facility for electric vehicles.

According to the agreement, BYD will invest eight billion yuan (about 1.11 billion euros) in a factory with an annual capacity of 15 GWh in the Fuzhou Hi-Tech Industrial Development Zone. In a second phase, another 15 GWh will be built. A decision on this is to be made “according to market demand”.

Such an agreement had been in the works for some time: As Gasgoo reports with reference to the business information platform Tianyancha, the company Fuzhou BYD Industry Co., Ltd was already founded in September as a 100 per cent subsidiary of BYD Auto Industry.

The Gasgoo article does not mention which cells are to be built in Fuzhou. However, BYD is best known for its LFP batteries, especially the so-called “Blade” battery with particularly large and sword-shaped cells. BYD had introduced the ‘Blade’ battery in March 2020 and uses it in the Han EV and Tang EV, among others. However, it was announced from the beginning that the batteries would also be sold to third-party customers. This reportedly now includes Tesla.

The new plant in Fuzhou is not BYD’s only new battery plant. Fudi Industry, BYD’s battery business unit, has also established six subsidiaries this year in Chongqing, Wuwei, Yancheng, Jinan, Shaoxing and Chuzhou. Battery production capacities of 10 GWh, 30 GWh and 30 GWh per year are to be built in Wuwei, Yancheng and Jinan respectively. In Chuzhou, the first phase will be 5 GWh.