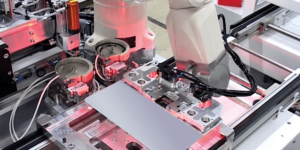 The German engineering company Manz has received an order from Britishvolt to supply machines for the first expansion stage of the factory under construction in Northumberland in northern England. Britishvolt intends to manufacture lithium-ion cells there with an initial volume of four GWh.

Manz has said that the order volume for this first expansion stage is more than 70 million euros. The preliminary work for the cell factory in Blyth began in September. A special feature of the plant is what Manz says is a “novel and forward-looking concept” that allows a high degree of flexibility and also adaptation to future market requirements for cell formats and geometries.

Delivery of the equipment is scheduled for 2023, with production starting towards the end of the same year. The German supplier, based in Reutlingen, promises that the “performance and cost-efficiency of production will be significantly improved.”

As part of the collaboration, there are plans to implement additional lines for cylindrical and prismatic cells in both England and Canada. These are expected to increase Britishvolt’s total production capacity to over 100 GWh.

Manz CEO Martin Drasch praised the early timing of Britishvolt’s order: “The dynamics in the e-mobility market is rapidly picking up pace. Given the large number of announced projects in Europe for battery lines, it is only a matter of time before the mechanical engineering sector reaches its development and production capacities limits,” Drasch said. “With the investment in the English location in the county of Northumberland, Britishvolt is now securing the resources required for its growth strategy from us in time.”

Drasch said that the two companies are aiming to make production more sustainable with a reduction of energy use and striving to reduce the total cost of ownership for customers, which should be achieved utilising a continuously automated process optimisation with the help of artificial intelligence.

Tomin Orlob, COO of Britishvolt said: “Manz AG, with their engineering and automation experience and expertise, as well as already being well-positioned and aligned to our potential customers, clearly understanding latest trends and market requirements. As such, Manz AG is the right partner for our initial production equipment.”

Manz AG says it has received a follow-up order worth 20 million euros from Britishvolt for machines to manufacture lithium-ion battery cells. The new deal follows an order already placed by Britishvolt for the first expansion stage of the planned facility in Northern England (see above), amounting to more than EUR 70 million.

The follow-up order comprises a customised production technology for the assembly of cylindrical cells, Manz added. The company also confirmed it was ready to deliver in 2023 as planned.

Britishvolt wants to start production as early as the end of the same year. The company’s ambitious growth plans reportedly include additional lines to increase production capacity to well over 100 GWh at factories in the UK and North America.

Only yesterday, Lars Carlstrom, the founder of Britishvolt and Italvolt, has announced another battery factory – this time in the USA. The newly founded company Statevolt is to build a factory in Southern California’s Imperial Valley that is to offer an annual capacity of 54 GWh when fully expanded – enough for around 650,000 electric vehicles.