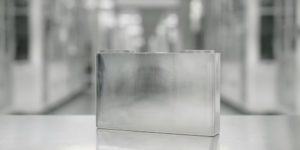 Northvolt has started up its Ett factory in Skellefteå, Sweden, with the production of the first battery cell. Northvolt says the first prismatic cell was manufactured there on 28 December. The first deliveries to customers are scheduled for 2022.

Northvolt says that the production of the first cell marks “a new chapter in European industrial history”, as it is the first battery cell to be completely designed, developed and assembled in a Gigafactory by a domestic European battery company.

The Swedish company announced the cell factory in Skellefteå in 2017 and started construction a year later. The company’s previous cells have come from Northvolt Labs in Västerås, where a small pilot production facility is located in addition to development. Industrialisation is to take place in Nothvolt Ett. Over the next few years, the production capacity is to increase to 60 GWh.

Northvolt intends to supply these cells to its customers, who have already placed orders worth the equivalent of more than $30 billion (€26.4 billion) with the company. Customers include BMW, Fluence, Scania, Volvo Cars, Polestar and Volkswagen. For the VW Group, Northvolt will manufacture the “unit cell” for the premium segment in Skellefteå.

Peter Carlsson, CEO and co-founder of Northvolt said: “Today is a great milestone for Northvolt which the team has worked very hard to achieve. Of course, this first cell is only the beginning. Over the course of the coming years, we look forward to Northvolt Ett expanding its production capacity greatly to enable the European transition to clean energy.”