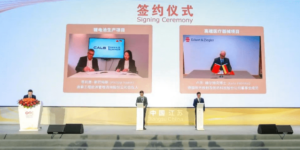 The Chinese battery manufacturer CALB (China Lithium Battery Technology) is now also planning a factory in Europe. An annual capacity of 20 GWh is planned. There is no further information on the location and timetable so far – but Germany seems to be in the running.

The signing of the agreement took place back in December at an event in the Innovation Industry Park in Jiangsu. The event was organised by the East Chinese province of Jinagsu, the city of Changzhou, the German Chamber of Commerce in China and the China-Germany Friendship Association.

The company does not give any further information or hints about the location in the announcement. However, in the email with which CALB sent the announcement, it says that it is a signal “that we can build an industrial base in Germany”. In the notice itself, it sounds even more restrained: the signed agreement creates “a solid foundation for the company to further explore its overseas markets and accelerate its global deployment”.

In September 2021, CALB had announced the expansion of its production capacities to 300 GWh by 2025. Among other projects, a 50 GWh plant is to be built in Hefei. Other sites to reach the 300 GWh installed production capacity are in Changzhou, Luoyang and Xiamen.

CALB’s automotive customers already include GAC Aion, Changan Auto, Geely Automobile and Xpeng. In September, CALB also stated in its announcement that it was in “technology development cooperation talks” with Volkswagen, Daimler and Great Wall Motors in the passenger car sector.

In addition to battery cell production itself, the company is also focusing on preliminary products: In the city of Meishan in the Chinese province of Sichuan, CALB is planning to build a new factory for cathode materials, which is to offer an annual capacity of 100,000 tonnes.

CALB came to an installed production capacity of 7.5 GWh in the first eleven months of 2021. This means third place among Chinese cell manufacturers, according to data from the China Automotive Power Battery Industry Innovation Alliance (CAPBIIA).