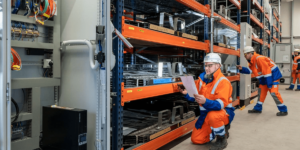 RWE has commissioned an energy storage system in Herdecke, North Rhine-Westphalia, which runs on used lithium-ion batteries from Audi electric cars. With this project, the energy company wants to gain knowledge in order to implement even larger storage systems in the future.

With the help of 60 battery systems, the new type of storage facility will be able to temporarily store around 4.5 megawatt-hours of electricity on the site of the RWE pumped storage power plant at Lake Hengstey. According to the RWE announcement, the electric car batteries come from development vehicles for the e-tron quattro. Audi itself also employs such used batteries in the charging hub in Nuremberg.

The battery systems still have a residual capacity of more than 80 per cent. RWE states that, depending on the intended use, up to ten years of residual life are still possible with the second-life batteries. In addition to the ecologically sensible further use, another advantage is that the used batteries are significantly cheaper than storage systems made from brand-new cells.

RWE has built a 160-square-metre lightweight hall in Herdecke. The battery systems were already installed in October, and individual components were put into operation in November – before the complete storage system went into operation in December. In addition to frequency maintenance, RWE also wants to test “other marketing methods flexibly”.

The findings from the reference storage facility in Herdecke should help RWE to build and operate larger storage facilities based on electric car batteries in the future. Concrete projects are not announced, however. “The experience gained from this project will help us to identify the applications in which we can operate such battery systems most economically,” says Roger Miesen, CEO of RWE Generation.

“Our joint project with RWE is intended to illustrate the opportunities to save resources by making use of used high-voltage batteries, and through smart integration into the energy network of the future,” says Audi Board Member for Development Oliver Hoffmann. “We are also thinking right now about what happens after this stage of utilisation and are expediting effective battery recycling.”