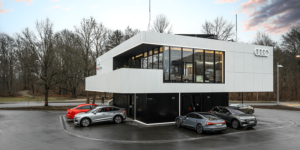 The pilot location in Nuremberg sees Audi testing its new fast-charging concept announced in May in practice for the first time. “We want to use it to test flexible and premium-oriented quick-charging infrastructure in urban space,” says Ralph Hollmig, Audi charging hub project manager.

The Audi Charging Hub consists of modular cubes that each provide two fast-charging stations. In addition, Audi also uses second-life batteries for the buffers taken from dismantled development vehicles. Not only does this reduce cost and waste, but it also decreases the complexity of infrastructure, i.e. removing high-voltage power lines and expensive transformers.

In Nuremberg, Audi has installed about 2.45 MWh of interim storage as planned and says the six reservable charging stations only need a 200 kW green power connection to the low-voltage network to fill the storage modules continually. Solar panels on the roof additionally provide up to 30 kW of energy.

Once the new hub opens to the public on 23 December Audi claims customers will be able to charge with up to 320 kW of power. The on-site energy will suffice to charge up to 80 vehicles per day without reaching the energy storage system’s capacity limits combined with the hub’s 200 kW power input.

Taking its own Audi e-tron as an example, the VW brand estimates the four-door Coupé can charge enough energy for up to 100 kilometres in about five minutes based on a charging capacity of up to 270 kW. A charge from 5 to 80 per cent takes roughly 23 minutes.

Those already driving a Plug&Charge ready model can also charge without an RFID (radio frequency identification) card at two of the six charging points during the pilot phase, so Audi.

The e-tron Charging Service contract also gives a price of 31 cents per kilowatt-hour at any time and at any charge rate. “We’re providing people in urban areas with charging at the price they would pay to charge using the Wallbox at home,” added Hollmig.

Plus, Audi e-car owners may also use the app to reserve one of the charging bays before arrival. This option is essential to Audi, which says the tests starting in Nuremberg focus on the new reservation function. The company further hopes to determine customers’ expectations of a premium charging experience and technical aspects like the requirements for modern battery storage systems and frequency of use.

Said premium experience is delivered by a swivel arm to move the charging cable. What is more, in today’s news, the company outlined the lounge services for the first time. In Nuremberg, these include an exchange station for electric bike batteries, an electric scooter lending service, information about various Audi products, as well as test drives in the Audi Q4 e-tron and RS e-tron GT, all supervised by Audi personnel. Additionally, Audi offers a delivery service for food and mobile car care.