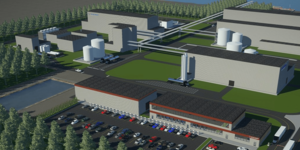 Thus, the licence rights extend to more than 1,000 square kilometres in Baden-Württemberg, Rhineland-Palatinate and Hesse, according to the company. Specifically, the licences are held by the German subsidiary Vulcan Energie GmbH, the parent company Vulcan Energy Resources is listed in Australia.

With the expansion, the company wants to be able to cover its offtake agreements concluded so far. “The identification of new areas with potential for geothermal energy production and CO2-free lithium production in the Upper Rhine Graben is a success of the tireless work of our experts,” says Vulcan CEO Horst Kreuter. “We can now supplement the production capacities covered so far and expand them in a timely manner.”

Such purchase agreements have already been concluded with major car manufacturers such as Volkswagen, Stellantis and Renault, and the South Korean cell manufacturer LG Energy Solution is also among the customers. Vulcan says that under current plans, lithium production is “already largely tied to off-takers” for the first five to six years of planned operations. “These new exploration licenses give us significant potential to further scale up our project as the market continues to grow, whilst also meeting the increasing demand for renewable heat and power,” the company explained.

So far, all these offtake agreements are still conditional on Vulcan actually starting lithium production in the Upper Rhine Graben. That is currently planned for 2024. The company announces that the “definitive feasibility study of the first project phase” is to be completed in the second half of 2022. In the first stage, an output of 15,000 tonnes of lithium hydroxide per year is to be achieved. The second expansion stage, starting in 2025, envisages an annual capacity of an additional 25,000 tonnes.

In geothermal plants, hot water is extracted from deeper layers of the earth to use its heat. In the Upper Rhine Graben, the thermal water contains lithium, which is now to be filtered out of the warm water before it is fed back into the earth. According to the Federal Institute for Geosciences and Natural Resources (BGR), the deep water in this region contains between 200 and 400 milligrams of lithium per litre.

However, there is also criticism, not only from local residents who fear seismic impacts from the drilling. In October, Vulcan Energy became the target of a short-seller attack. The short-seller J-Capital accused Vulcan of deceiving its shareholders with implausible assumptions – specifically, about too high extraction rates of the brine and how much of the lithium contained in it could actually be filtered out with available processes.