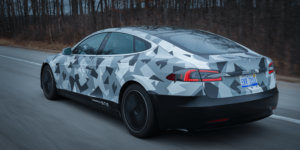 The US battery start-up Our Next Energy (ONE) has installed a prototype of its Gemini battery pack in a Tesla Model S and, according to its own figures, achieved a range of 752 miles, or around 1,200 kilometres.

ONE, which is supported by BMW among others, states the capacity of the battery pack installed in the Tesla at 203.7 kWh, and the volumetric energy density at 416 Wh/l. The battery in the demonstration vehicle is said to use the same installation space as the original battery in the Model S Long Range Plus, which has a capacity of 103.9 kWh. ONE does not state the weight or the gravimetric energy density in the press release.

The range of 752 miles or 1,210 kilometres with the proof-of-concept battery was achieved in a road test in Michigan, which took place in December – so presumably not even under optimal climatic conditions. The average speed was 55 mph or 88.5 km/h.

However, the results were also validated by third parties on a test bench, ONE said. At a speed of 55 mph, the converted Model S actually got 882 miles. That’s 1,419 kilometres.

With the demonstration drive, ONE has achieved relatively exactly those values that the company had announced as a goal. ONE has developed an LFP battery called Aries with a cell-to-pack approach. The Gemini technology is a kind of mixed battery pack: a second, high-energy battery pack is coupled to the Aries battery and charges it like a range extender. Last year, a range of 750 miles and an energy density of 450 Wh/l was already mentioned as a target.

“We want to accelerate the adoption of electric vehicles by eliminating range anxiety, which holds back most consumers today,” says Mujeeb Ijaz, founder and CEO of ONE. “We are now focused on evolving this proof-of-concept battery into a new product called Gemini™, which will enable long distance trips on a single charge while improving cost and safety using sustainable materials.” The production battery is expected to be unveiled in 2023.

According to Ijaz, the company is only marginally concerned with ranges of over 1,000 kilometres. Even today’s electric cars with high ranges lack excess energy to achieve high ranges in extreme weather, mountainous terrain or towing a trailer. Under such conditions, the range drops extremely, “making car trips less enjoyable than they should be”.