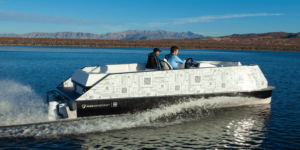 Pure Watercraft, a Seattle-based developer of electric boating solutions, has brought an electric pontoon to CES that incorporates GM technology. The company says pre-orders are open and hopes to begin deliveries before the year’s end.

General Motors reportedly acquired a 25% stake in Pure Watercraft in November last year without disclosing many details. The electric pontoon now presented in Las Vegas is the first fruit of the cooperation with Pure using a 66-kWh battery pack from GM, which the boat likely shares with the Chevy Bolt, given the capacity.

Pure Watercraft further claims the ten-person pontoon has a range of 100 miles (161 km) at five mph (8 km/h), but that drops to 32.2 miles (51.8 km) when travelling at top speed. However, let’s not forget that this is a pontoon designed for cruising around lakes. The segment, however, represents approximately 20% of the US recreational boating market, growing more than 20% annually, so Pure Watercraft.

There is also an integrated Level 1 charger, which helps recharge the boat in 27 hours. An optional 220V Level 2 charger can fully replenish the battery pack in 8.5 hours. The ship also takes DC fast charges to recharge to 80% in an hour.

Pre-orders through Pure Watercraft require a $100 deposit. The deposit won’t go a long way, though, as prices are expected to start at $45,000 for the single outboard variant and $60,000 for the twin outboard version.