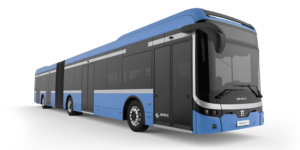 The Dutch electric bus manufacturer Ebusco has received a follow-up order from public transport operator Stadtwerke München in Germany. The order is for 14 electric 18-metre buses of the type Ebusco 2.2. Delivery is scheduled for the first half of 2023.

“After the 12-metre buses from Ebusco met the range expectation, we are looking forward to taking its big brother on the road,” says Veit Bodenschatz, Managing Director and Head of Bus Operations at Münchner Verkehrsgesellschaft (MVG). In Munich, the aforementioned twelve Ebusco 2.2 are already in use as solo buses in the 12-metre version, as well as two Ebusco 3.0, which, as reported, were recently handed over to Stadtwerke.

The electric buses from the Dutch bus manufacturer are mainly on the road in the Netherlands, Belgium and Denmark, with a significant number also in use or planned in some cities in Germany. Ebusco only just received an order from a new customer in Germany in December last year. Infra Fürth Verkehr GmbH had ordered three 18-metre long articulated buses of type Ebusco 2.2.

Shortly before, twelve type 2.2 vehicles were delivered in Frankfurt, and Ebusco also received an order for 90 units from the BVG in Berlin. Delivery to the capital is scheduled for this year. The contract includes an option to order another 60 Ebusco 2.2s up to one year after delivery of the first bus.

US Postal Service (USPS) wants $3.3Bn to electrify the fleet