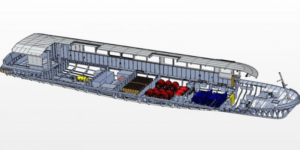 Proton Motor Fuel Cell and Torqeedo are working together on an innovative hydrogen hybrid propulsion system kit for maritime mobility that can deliver fuel cell outputs between 30 and 120 kW and variable hydrogen storage capacity.

The project, with the working title “Ma-Hy-Hy” (Marine Hydrogen Hybrid), is intended to complement Torqeedo’s existing Deep Blue Hybrid drive portfolio with fuel cell technology from Proton Motor, according to Proton Motor. It is a purely Bavarian cooperation: Proton Motor Fuel Cell GmbH is based in Puchheim, Torqeedo GmbH in Gilching. “Ma-Hy-Hy” is also funded by the Free State of Bavaria.

According to the Proton announcement, the funding covers the development of a maritime “high-voltage hybrid drive with fuel cell and battery”. The solution is to be used in inland vessels, but also in the offshore sector. However, Proton Motor does not specify the amount of funding in the announcement.

Since a modular system is to be developed, there is only a range for the planned performance data. The fuel cell is to have an output of between 30 and 120 kW, the propulsion power is given as 50 to 200 kW. The batteries will be between 40 and 160 kWh, and “hydrogen storage of any size” will be possible.

For the further development of Proton Motor’s fuel cell systems for maritime applications, a prototype is to be tested and validated on a Torqeedo test rig. As an expert in electric boat drives, the Deutz subsidiary has experience with e-drives in marine applications.

At the end of the project in 2024, there should be a functioning system. After the successful completion of the project, steps towards industrialisation and joint sales and marketing activities are planned, says Proton Motor.